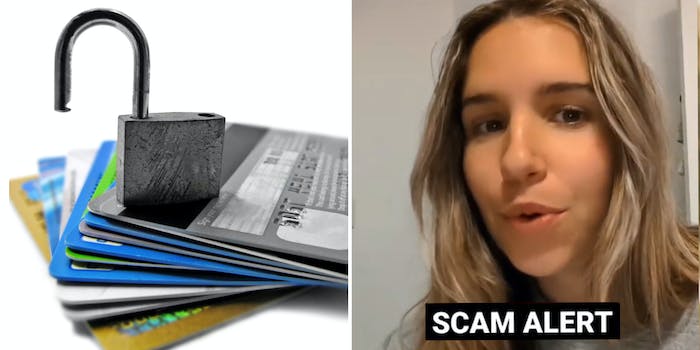 ‘They literally switched and gave me a fake card’: Woman says she was scammed by a child and taxi driver who stole her credit card

'Everyone thinks they won’t get scammed but there are so many tactics it can happen to anyone.'

A woman on TikTok is sharing her story of being scammed by a child and taxi driver in the hope that other people do not fall for the same trick: having their card swapped out and stolen under the guise of paying a child’s fare.

User @meggylouu shared her experience on the platform, where some commenters posted their own past experiences with scam artists.

Scammed by a child 🤡 But seriously I hope this helps someone avoid a situation like this bc it sucks. I’ll do a part 2 when I hear back from the bank and police

“It’s super embarrassing but I’m pretty pissed, so I just wanted to hop on and share,” @meggylouu said. “I got scammed tonight, and I wanted to just let people know in Toronto, wherever you are, so this doesn’t happen to you for just literally being fucking nice to somebody.”

The creator said she was walking home when a young boy stopped her and asked for $7.50 to pay his cab fare because the driver supposedly would not take cash, only cards, due to COVID-19. Thinking it was a kind thing to do, she said she handed the driver her card to pay the fare, and the boy gave her his cash. When she got home and went to pay her credit card bill online, she realized her account was missing $1,500.

In the process of reporting the fraudulent transactions to her bank and filing a police report, @meggylouu said her bank representative told her that the card she had been handed back by the taxi driver was not hers.

“I don’t even know when, I didn’t look away, or I must’ve—they literally switched and gave me a fake card, kept my card and went and just took out money immediately after,” she says in the video.

In a follow-up video, @meggylouu says her bank was able to restore her stolen funds, telling viewers that some people had replied to her first video saying the same thing had happened to them, but they were unable to get their money back.

I saw the timer ending and freaked out lol 🤍🤍🤍 Thank you again to everyone who has reached out to me xx Unfortunately this negative interaction has spread but there is WAY more good in the world than bad. Be safe and stay positive! 👼🏼

Some viewers said her video helped raise awareness of this type of scam, and had even prevented it from happening again. Others shared their own experiences with the same situation.

“Someone just tried this on my near Bloor and Palmerston and I knew not to fall for it because of your video,” one commenter wrote. “Thanks and so sorry this happened to you.”

“Yoooo this happened to me omg but I said no I only have cash,” another commenter wrote. “He begged me to use my card I said no I don’t trust taxis and cards.”

“Same thing in North York,” a commenter wrote. “Cancelled my card right after the interaction. Situation felt sketchy… kept their 10$ cash though.”

The Daily Dot has reached out to @meggylouu via Instagram DM regarding the videos.