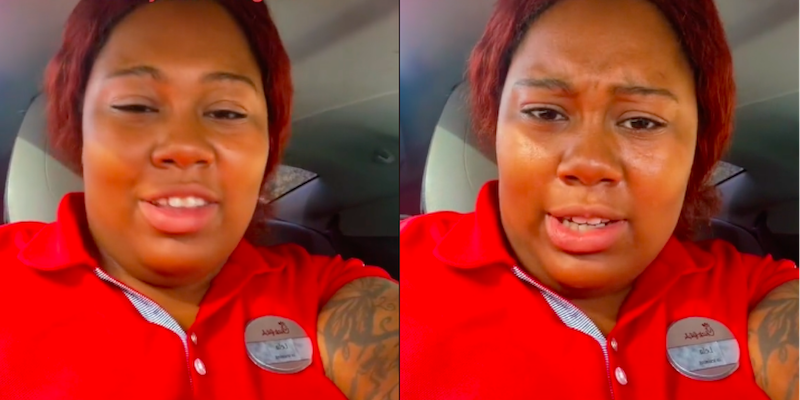 ‘Chick-Fil-A being extremely nice to everyone except its employees’: Worker says she quit after 3 days because of poor treatment

'I worked the top of my damn wig off.'

Chick-fil-A is known for its high-quality customer service, which in and of itself has become a meme. But a TikTok creator says she worked at the fast-food chain for three days and quit because of what she had to deal with.

“Sorry y’all I worked the top of my damn wig off,” the overlay text on the video says.

The creator addresses the audience in a video recorded from a car, stating that she’s on her third day of the job and breaking down what happened during her short time. She says on her first day, she wasn’t allowed to park in the parking lot of the restaurant. Managers requested that she and other employees park across at a church across the street.

“Second day, man wants me to hold his meal in the middle of a rush while he ties his shoes,” she says in the video. The creator says her manager encouraged it and said it was OK. On the third day, the TikToker says, a customer who dines there often was $5 short to pay for their meal and asked her to cover it for him and until he could reimburse her.

She ended the video by saying that what they were asking her to do was “far beyond customer service.” The video was uploaded last week and by Thursday had over 634,000 views and over 85,000 likes.

In a follow-up video, the creator said she received a text message from someone at Chick-fil-A to talk about her video. “Y’all I’m in trouble,” the TikToker wrote. She clarified that she no longer works for the company and left after her third day.

The comments section seemed to be baffled by the ridiculousness of the company’s actions. “Chick-Fil-A being extremely nice to everyone except its employees,” one person commented.

The Daily Dot reached out to Chick-Fil-A and the TikTok creator.