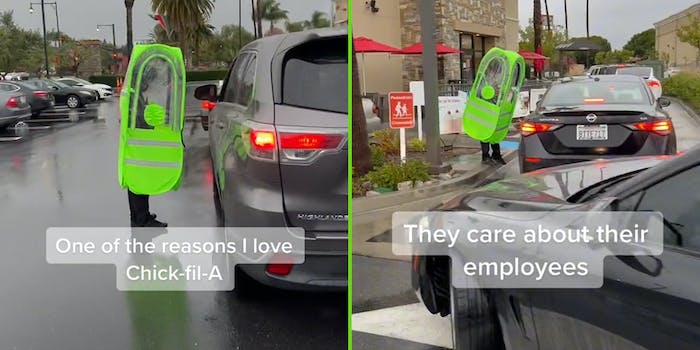 ‘They care about iPads with employees’: Customer claims Chick-fil-A cares about its workers because they are given weather pods, sparking debate (updated)

'One of the reasons I love Chick-fil-A ... they care about their employees.'

In a viral TikTok video, a customer shows Chick-fil-A workers wearing weather pods while taking orders outside. He claimed that the fast-food company cares about its employees, causing controversy among other users.

“One of the reasons I love Chick-fil-A … they care about their employees,” the user, @fadiataalla, wrote via overlay text on the video.

The TikTok shows Chick-fil-A employees enclosed in bright yellow weather pods to protect them from the rain.

With over 2.7 million views, the user’s claim that Chick-fil-A cares about its employees sparked debate among users in the comments.

Several disagreed with the sentiment, claiming that Chick-fil-A solely cares about profits.

“They just care about the money … not their employees,” one user said.

One user suggested that the company was simply trying to protect the iPads the employees use.

“They care about iPads with employees,” they said.

“Not true they could use a waterproof case,” another argued.

Many other users urged that the workers shouldn’t have to stand outside regardless of the conditions.

“If they care about the employees they should never make them stand outside that’s not part of the job it’s not even in the handbook,” one user said.

“Like, no other fast food chain makes their employees stand out in the rain with or without a proprietary wearable rain shelter,” another said.

One user noted that the workers at their local Chick-fil-A do not have weather pods: “Not true the one next to my house are without this rain protection.”

Update 10:10am CT Jan. 14: A representative for Chick-fil-A explained to the Daily Dot that the pods were provided to workers as a weather solution during the pandemic so that it could accommodate an influx in drive-thru orders. They also emphasized that nothing is more important than the safety of its team members.

The Daily Dot reached out to user @fadi.ataalla via a TikTok comment.