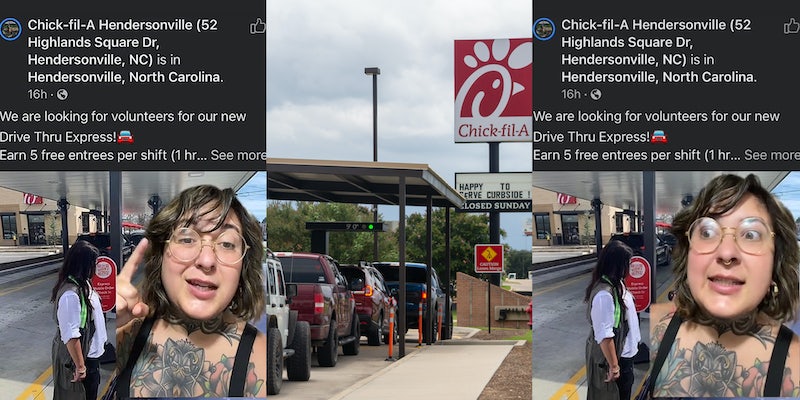 'It’s so miserable working outside when it’s hot. I hardly wanted to do it when i was paid.'

A North Carolina-based Chick-fil-A is being dragged after putting out a Facebook post, in which it asked for unpaid volunteers to work the drive-thru.

While the post has since been deleted, a statement on the franchise’s original Facebook page said the following: “We are looking for volunteers for our new Drive Thru Express! Earn 5 free entrees per shift (1 hr) worked. Message us for details.”

In the comments section under this post, the franchise doubled down on the idea, according to reporting from Vice.

“Thanks for everyone’s concern on this matter,” the store wrote. “This is a volunteer based opportunity, which means people can opt in to volunteer if they think it’s a good fit for them. We’ve had multiple people sign up and enjoy doing and have done it multiple times. People who sign up for this chose it voluntarily.”

“We are still hiring full time and part time team members, so if you are interested in working in our store, we pay $19/hr,” the comment ends.

Local reporting supports the idea that this is a franchise and not a corporate policy.

The request for unpaid volunteers from a company owned by a family worth $14.2 billion set off shockwaves across the internet. Posts on sites like Reddit accumulated over 22,000 upvotes, and users telling the story on TikTok garnered tens of thousands of views.

For example, user Bona (@bona.bones)’ video on the topic currently has over 91,000 views.

“It’s despicable for any employer to not pay somebody who’s working for them, let alone a corporation as big as Chick-fil-A,” she says in the video. “Like, what the fuck is this? Please explain.”

Bona alleges in a later video that the business’ request for volunteers is most likely illegal.

“Under FLSA regulations, an individual cannot volunteer services to a private, for-profit company,” reads a post from the Society for Human Resource Management, visible in Bona’s video. “There are no general regulations that permit volunteering of services to an employer in the private sector. All hours worked must be paid.”

In the comments under Bona’s video, users shared their thoughts on the legality of the situation.

Others noted the fact that North Carolina has recently experienced incredible heat waves.

“And not in this heat either,” a commenter shared. In response, a further TikToker wrote, “Cannot begin to tell you how many of my friends, including myself, got so sick from working in the direct sunlight in 100+ heat.”

“It’s so miserable working outside when it’s hot,” an additional TikToker stated. “I hardly wanted to do it when i was paid.”

The Daily Dot reached out to Bona via website contact form as well as to both the Hendersonville Chick-fil-A and Chick-fil-A corporate via email.