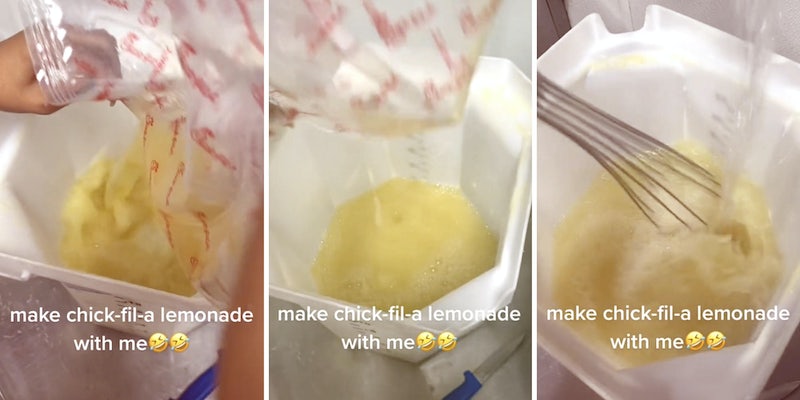 ‘I thought it was fresh’: Chick-fil-A worker shows how they make lemonade in viral TikTok

In a viral TikTok video, a Chick-fil-A employee reveals how they make the lemonade, sparking a debate about what “fresh” really means in the comments.

“Y’all love chick fil a lemonade,” the worker, @bigniyyyyy, wrote in the caption of the video with nauseated face emoji.

The video shows the employee pouring pre-packaged lemon juice and sugar into a large tub in a sink. Then, they fill it up with water from the sink spout.

The employee’s behind-the-scenes reveal received over 217,000 views. Many TikTok users were put off by the use of sink water.

“Only thing wrong is the sink water,” one user said.

“I thought it was fresh…” another wrote.

Even the worker themself seemed to feel uncertain about the use of sink water.

“I don’t understand what’s wrong with it … lemonade mix, water and sugar, is that not how [you] make it,” one user asked.

“The sink water tho,” the worker responded with yet another nauseated face emoji.

Many other alleged Chick-fil-A employees responded to those unhappy with the use of sink water, claiming that the sink uses filtered water so that it can be used in food and drinks, like the lemonade.

“Yeah everyone is saying it’s a faucet but the faucet at my location was distilled filtered water and it was a tube attached to it,” one said.

“That water spout is purified lol, it’s used to make the biscuits in the morning, too….or maybe that was just my store,” another wrote.

However, many others made fun of those who expected anything different to be put in the lemonade.

“Oh [for real]? I thought y’all was fresh squeezing a thousand lemons and using Fiji water in the back,” another sarcastically quipped.

“Oh no! Who would’ve thought lemon juice, water and sugar go in lemonade,” a third user chimed in.

Several former Chick-fil-A employees claimed they used to actually squeeze the lemons themselves.

“At my location we use to cut and squeeze lemons and we used warm distilled water,” one said.

But others defended the pre-packaged lemon juice in response.

“No it’s like fresh squeezed lemonade juice, they just come in refrigerated packs so we don’t have to measure it,” one said.

“They are fresh. In the pack she opened was lemon juice. At my [Chick-fila-A], our[s] wasn’t more than a day old,” another wrote.

The Daily Dot reached out to user @bigniyyyyy via Instagram direct message and Chick-fil-A via email.