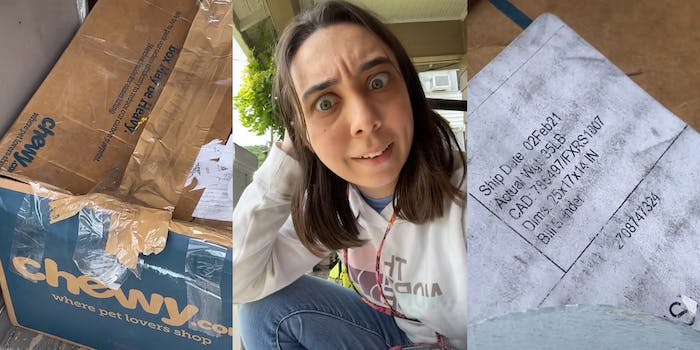 ‘Where have you been?’: TikToker says Chewy order came ‘mangled’ and over a year late

'That's not Chewy's fault. That's the fault of the carrier.'

A TikToker is calling out Chewy and its delivery carriers after receiving a “mangled” package over a year after it was ordered.

In the now-viral TikTok, user Jordan (@that.one.teacher.lady) shows the box and the date it was ordered, telling Chewy that “we need to talk.”

The video starts with Jordan calling out Chewy by name.

From there, she explains that she came home to discover a semi-destroyed Chewy box on her doorstep. Confused, Jordan looked at the date on the box to realize that the box was actually shipped in February of 2021.

In comments, users jumped to Chewy’s defense, saying that the delay was most likely on the part of the carrier, in this case, FedEx.

“That’s not Chewys fault,” one user wrote. “That’s the fault of the carrier.”

“As an avid chewy supporter, I can say with certainty that this was probably fed ex’s fault,” another agreed. “They have got to stop using them already.”

Eventually, Jordan conceded that this might be the case.

“This may actually be the fault of shipping from Fed Ex,” she says.

Still, this inspired other Chewy supporters in comments to encourage the brand to stop using the shipping carrier.

“THATS ON FEDEX. COMPLAIN TO CHEWY ABOUT FEDEX!! THEY NEED TO STOP CONTRACTING WITH FEDEX!!!” exclaimed a commenter.

“It’s because they use fedex the worst shipping company ever,” stated another. “I really wish they’d change.”

While most blamed FedEx, a few claimed that Chewy boxes were flimsy and thus more prone to this kind of damage.

“I use[d] to work for FedEx and to be honest Ive seen chewy boxes 10 times worse,” one commenter recalled. “It probably got lost in QA because the box is flimsy and broke.”

“Listen as an old fedex package handler, chewy boxes deserve it,” another shared.

For the curious, Jordan shared her belated haul.

The package simply contains dog food. While the food is technically shelf stable, some commenters say it’s still probably unsafe to give to dogs.

“I wouldn’t feed either food,” one user noted. “It’s a shame and I know it’s shelf stable BUT it’s been out in different temps and bacteria could [have] grown.”

We’ve reached out to Chewy via email and Jordan via TikTok comment.