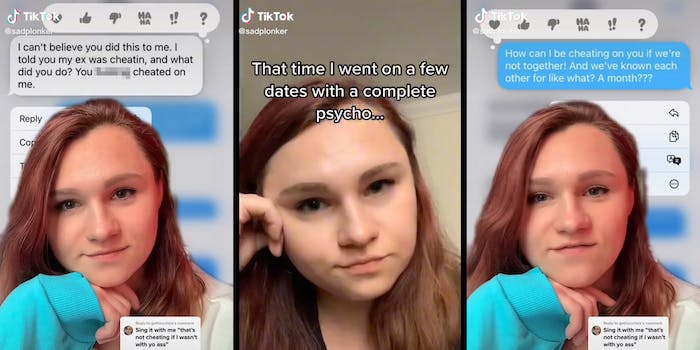 ‘How can I be cheating on you if we’re not together!’: Man accuses woman of cheating on him after they go on ‘a few dates’

'Glad you dodged that one.'

Viewers are resonating with a TikToker’s bad dating experience.

@sadplonker posted a video a week ago recounting “That time I went on a few dates with a complete psycho.”

The video shows a text exchange between the TikToker and the “complete psycho” in question. According to the text exchange, the person was under the impression the two were dating.

“You trying to hook up behind my back?” the first text from the other person reads.

The other person went on to question: “What made you think we were not dating?” to which the @sadplonker expressed shock.

“ARE YOU SERIOUS,” then TikToker questioned.

“Sweetie, you’ve been leaving me on read for a week,” another text from @sadplonker reads. “Not to mention you’d told me, ‘I’m not looking for anything serious (right now),’ so what do you expect?”

The other person said they were busy moving and implied once again the two are dating. “I can’t believe you did this to me. I told u my ex was cheatin, and what did you do? You fucking cheated on me.”

The TikToker then reiterated that they are not dating, saying, “How can I be cheating on you if we’re not together! And we’ve known each other for like what? a month?”

“We are together!” the other person responded before nonsensically breaking things off with the TikToker since @sadplonker “cheated.”

The person seems to threaten the TikToker with the nude she allegedly sent, but she told him she pulled a boob photo from the internet to send. The man then body-shames the TikToker.

The encounter was enough to have the TikToker swearing off “casual dating” in the caption.

The video has been viewed over 2.3 million times. Viewers are resonating with the TikToker’s experience in the comments.

“Why is it always that their ex cheated so we deal with the baggage,” one commenter wrote. “Honey no, sort yourself out. Fix your issues then date.”

“Why is the excuse for not texting back always, ‘I was moving,’ or ‘I was helping my friend move’?” another questioned.

“Makes me really wonder did his ex actually cheat on him, or was it just another situation like this where she wasn’t actually with him too,” a third said.

“We’re always fat after we reject them lol,” a fourth said.

Others found some humor in the situation, from her replies to the ridiculous nature of some of the texts from the man.

“‘Why are you like this? I’m just asking x’ absolutely cracked me up,” one commenter wrote.

“‘Just because I said I’m not looking for (something) serious, doesn’t mean I can’t be serious,'” a second said. “So you can’t trust his word and he doesn’t know what he wants?”

The Daily Dot reached out to @sadplonker via Instagram direct message regarding the video.