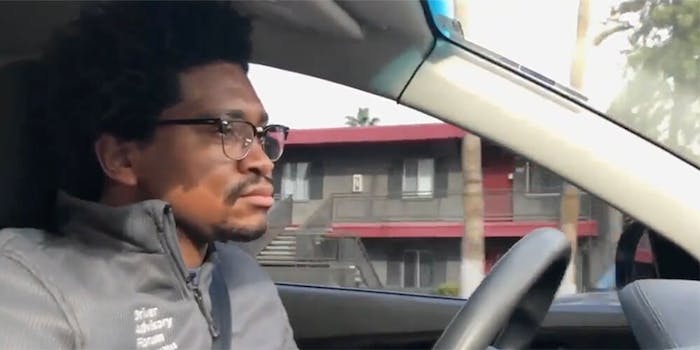 CEO caught on camera calling his Uber driver the N-word

The driver said he 'was in shock.'

An Arizona CEO was filmed using a racist slur and cussing at his Uber driver after both parties agreed to cancel the ride over a seating disagreement, according to ABC15.

The businessman has been identified as Hans Berglund, the founder and CEO of AgroPlasma, an organic agriculture production company in Tempe, Arizona.

The Uber driver, Randy Clarke, is an Arizona State University student who got matched with Berglund on Friday night for his Uber ride.

Clarke, who has a high rating on Uber, provides iPads and snacks for his passengers, according to ABC15. But he has one condition: The front seat is only reserved for a group of three or more. He said he made the rule after a drunk passenger sat in the front seat and sexually assaulted him in 2018.

In the video shared by ABC15, Clarke is seen politely asking Berglund if he’d take the back seat.

“Mind sitting in the back?” he asks.

“No, I don’t like to sit there,” Berglund responds.

“I don’t like when people sit in the front,” Clarke says.

After that, the two agreed to cancel the ride, and Clarke said he would refund Berglund for the ride.

“Is that because I’m white?” Berglund asks, leaning in closer to the driver’s seat.

“No, sir it’s not because you’re white,” Clarke responds.

“I was in shock,” Clarke later told ABC15. “I shamelessly felt like laughing because I did not know it was actually real.”

Clarke later found out Berglund’s background and his business. It concerned him that Berglund may be employing people of color.

The snippet that appeared on Google under the link said Berglund is a Swedish immigrant. He donated to President Donald Trump and the Republican National Committee in 2018 and 2019.

The Facebook page for his company was unavailable on Wednesday morning, and the website did not load.

AgroPlasma told the Daily Dot on Wednesday that Berglund is no longer the CEO, and the company is conducting an investigation.

“The incident is not at all reflective of AgroPlasma’s values and ethics,” the company said in an email. “Our relationships with our employees, customers and the community are the cornerstones of our success, and we are doing everything in our power to rebuild their trust and repair the harm that has resulted from this incident.”

Clarke said he would want Berglund to apologize. Berglund issued an apology via ABC15, although it’s not clear if he directly apologized to Clarke. The Daily Dot has reached out to Clarke and will update this report if he responds.

“I deeply regret and apologize for the hurtful and derogatory language I used during the altercation with Mr. Clarke,” Berglund told ABC15. “I firmly believe that there is no excuse for the use of racial slurs under any circumstance, so I will not offer any. It is my sincere hope that Mr. Clarke hears and accepts my apology and believes me when I say it is honest and heartfelt.”

In a statement to the Daily Dot, Uber said it has launched an investigation into the incident.

“Discrimination has no place on the Uber app or anywhere,” the statement said. “What’s been described is a clear violation of our Community Guidelines and we launched an investigation as soon as we learned of it.”

Clarke told ABC15 that Uber notified him that Berglund’s account has been temporarily suspended.