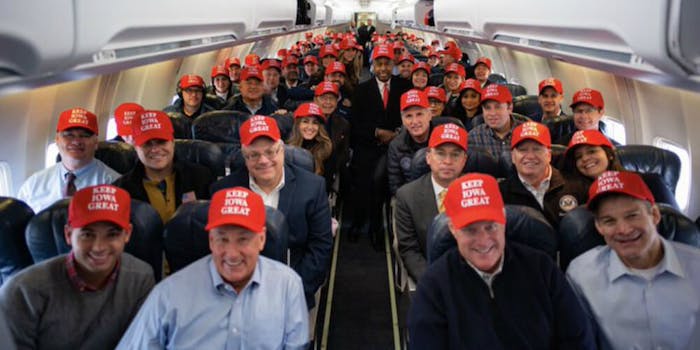 'It’s only the 4th day of Black History Month folks.'

It took until this afternoon for the photo to gain traction online.

Tuesday morning, Tim Murtaugh, director of communications for President Donald Trump’s reelection campaign, tweeted photos of the Trump campaign leaving Iowa after the president’s victory in the Iowa GOP caucus. However, individuals online have started to critique Murtaugh’s group photo, specifically pointing out that Ben Carson, secretary of Housing and Urban Development, appears to be just one of a few people of color on the plane donning a “Keep Iowa Great” hat.

.@TeamTrump headed home after CRUSHING it in Iowa.

Record turnout for an incumbent president.

Didn’t have time to pay attention, so how’d it go for the Democrats?

Everything go off without a hitch? pic.twitter.com/gQsiyRQvry

New York Times reporter Shane Goldmacher tweeted out the photo, saying, “There is a lot happening in this picture, but also only one thing happening.”

There is a lot happening in this picture, but also only one thing happening pic.twitter.com/Pn247J83LA

Former Sen. Claire McCaskill (D-Mo.) tweeted out the photo, saying, “One of these things is not like the others.” McCaskill then pointed out that Carson was seemingly the only person not seated for the picture.

One of these things is not like the others. Hint: they made him squat in the aisle so he was visible. pic.twitter.com/aFxrRRjbPi

Others online pointed out how the photo could be negatively interpreted, especially during Black History Month and on Rosa Parks’ birthday, due to Carson being Black and mostly surrounded by white Trump supporters.

Harriet Tubman ran, so Rosa could sit, so Ben Carson could.. ..Do whatever it is that he’s doing. It’s only the 4th day of Black History Month folks. pic.twitter.com/iILn3JlcRt

Not sure you're aware, but Rosa Parks fought so that you could have your own seat.

“1. Dr. Ben Carson did not have a seat in this pic because he was sitting in First Class with my family. 2. Dr. Carson is not a ‘thing,’ he is a world renowned, life-saving neurosurgeon,” he tweeted.

In case anyone was wondering where Ben Carson’s seat was on the Team Trump plane – just check First Class top left. Thanks for playing Claire. pic.twitter.com/HxyHKz7PHp

Black Trump supporters, such as Katrina Pierson, a senior advisor to the president’s reelection campaign, pointed out there were other Black individuals on the plane and called McCaskill a “closet racist.”

Only a closet racist would make such an incredibly stupid and non factual observation.

There were several “things” on that plane.

TWO OTHERS IN THAT ROW!

You’ll see us soon in a town near you. https://t.co/N8kK0ZjybH

McCaskill responded to criticism by saying she was just “pointing out a lack of diversity.”

Ummm. Pretty sure pointing out a lack of diversity is not racist. Sorry Trump world.

On Tuesday morning Trump celebrated his victory in Iowa, taking a more explicit approach compared to the sarcasm Murtaugh used to mock the Democrats delayed results.

The Democrat Party in Iowa really messed up, but the Republican Party did not. I had the largest re-election vote in the history of that great state, by far, beating President Obama’s previous record by a lot. Also, 97% Plus of the vote! Thank you Iowa!