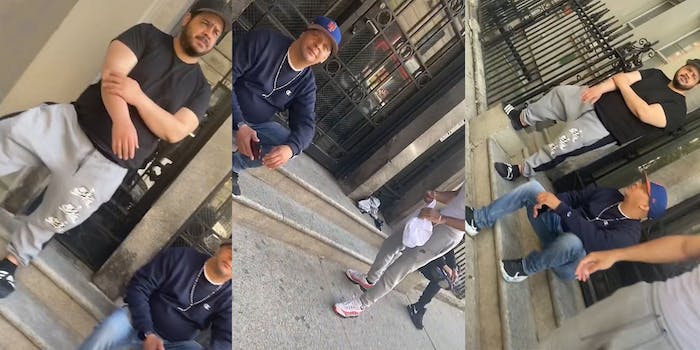 ‘His friends will never let him live that down’: Woman’s comeback when she gets catcalled goes viral on TikTok

'Men know what they're doing, just leave us alone.'

A woman got cat-called in New York City, and TikTokers think she had the best response.

Beki (@rebekahlindsayyyy) posted a video of herself walking in New York to TikTok. On her stroll, a man catcalls her, saying “I hope you have a good day at work, miss.” Her reply? “Oh, I thought you were begging for money or something.” As she walks off, his friends can be heard laughing in the background.

One user said, “She knows how to NY.”

Another said, “This is iconic ngl.”

Kyle Prue, a TikToker known for his series of videos on things you can say to upset men where he’s suggested similar tactics, commented. He said, “I don’t know you, but I’m proud of you.”

Other commenters expressed confusion, asking if the men were just trying to be kind and wish a woman well. New Yorkers were quick to reply, saying that this was a common way to get catcalled in the city, and engaging with it positively may cause the men to try to follow you and continue a conversation.

One TikToker commented, “all the ppl saying he was just being nice. u think he was saying that to every man who passed by? men know what theyre doing, just leave us alone.”

While this lighthearted video made many people laugh, it also called attention to a rampant issue in New York: street harassment of women. With 97% of women experiencing sexual harassment in their lifetime, catcalling can be an unnerving, and sometimes dangerous, experience.

According to a study done by Stop Street Harassment, 99% of women have reported experiencing street harassment in their lifetime. This study deemed behaviors such as leering, honking, whistling, and verbal harassment as examples of street harassment, alongside more dangerous ones, like being followed, assaulted, or physically touched.

The Daily Dot contacted Rebekah for comment on this story but was not met with an immediate response.