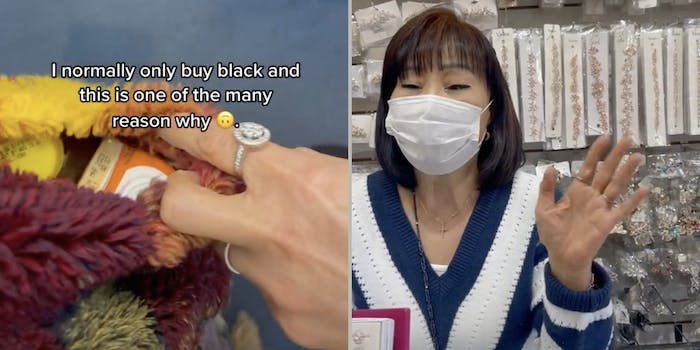 'I normally only buy black and this is one of the many reasons why.'

Model Megan Milan (@megan.milan) was shopping at a beauty store in Los Angeles’ Santee Alley when the cashier reached into her jacket pockets to check for stolen products. Milan captured this interaction and the following confrontation in several viral TikToks. Her most-viewed video received over 1 million views on the platform.

In her first video, Milan—who is Black—says she was racially profiled.

“Only Black person in the store and you decided to check my pockets,” she says to the cashier, who is Asian, in a follow-up video. “I’m the only Black person. And you dug your hands in my pockets.”

Commenters left Milan supportive messages under her video. Some pointed out that anti-Blackness is a pervasive issue among Asian and Asian American communities.

“That’s exactly why I haven’t been inside of an Asian own beauty supply in like 7 years,” one user commented. “Y’all stay safe though.”

“See, this makes me think about Latasha Harlins,” one user wrote, referencing the 15-year-old Black girl who was shot and killed by a Korean convenience store owner in 1991. “It’s why I don’t play the POC game. I’m BLACK. We are not the same.”

“If you’re black don’t shop here,” one Yelp review reads. “The employees will racially profile you and check your pockets without warning.”

Yelp has temporarily disabled users from leaving reviews on Hi Fashions’ page while they “investigate the content.” The page currently has a Public Attention Alert.

Hi Fashions is the latest Asian-owned business to receive public attention for anti-Blackness. In 2018, Refinery 29 reported on the “long history” of Black-Asian conflict fueled by media coverage and prevalent stereotypes of both racial groups. In recent years, such incidents have fueled the growth of Black-owned beauty supply stores.