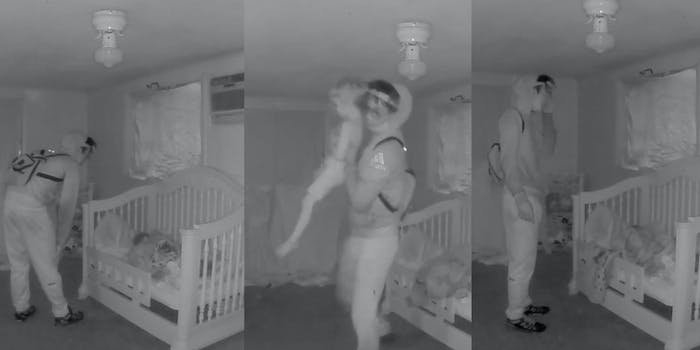 The video reportedly shows the man returning to the bedroom in the aftermath of the boy's death and hovering over his twin brother.

A video shows an alleged kidnapper taking 4-year-old Cash Gernon from his bed in Dallas. Hours later, Gernon was found dead; the man seen in the video has since been charged in connection to his death, according to multiple reports.

Home surveillance footage allegedly captured 18-year-old Darriynn Brown picking up Gernon as the child slept next to his twin brother and leaving the bedroom with him at around 5am Saturday morning, according to the Daily Mail, which obtained and published the video.

Roughly two hours later, Gernon was fatally stabbed, according to the New York Post. A woman jogging in the street reportedly found his body.

The security footage allegedly showed Brown returning to the bedroom in the aftermath of Gernon’s death and hovering over his brother, Carter, according to the Daily Mail. He reportedly left the house without taking Carter.

The guardian of Cash and Carter Gernon reportedly said Brown has no connection to the boys and insisted the alleged attack was random, according to the Post. Carter has since been reportedly taken out of the home by Child Protective Services (CPS).

Brown was charged with kidnapping and theft and is being held on $750,000 bail, according to the Post.

The Daily Dot has reached out to the Dallas Police Department.