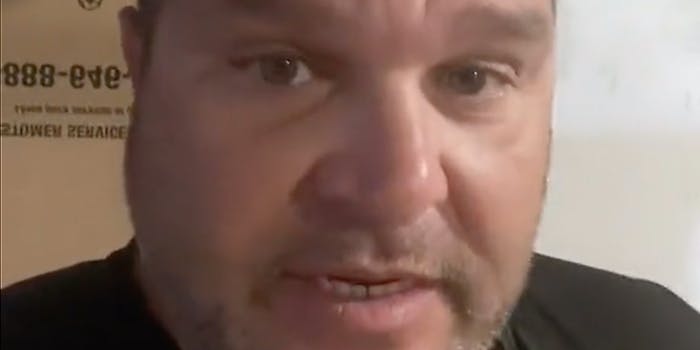 Man goes off on unvaccinated hospital patients in viral video, says wife who has cancer was released early to make room for them

His video has reportedly helped changed some people's minds when it comes to the vaccine.

The husband of a cancer patient went on a now-viral TikTok rant about how unvaccinated COVID patients are pushing out vaccinated patients, like his wife, to the back of line at hospitals. His video has reportedly helped changed some people’s minds when it comes to the vaccine.

Jason Arena, who lives around Charlotte, North Carolina, told the Daily Dot that it infuriated him when his wife was released from a local hospital before her cancer treatment was complete, because the hospital was seemingly making room for COVID patients.

The incident took place late in July, and he uploaded the video earlier in August.

“What I am going to argue with you about is you running to the hospital once you get the virus,” he continues. “If you don’t trust the medical field to prevent you from getting it, why do you trust them to cure you from it?”

“Keep your ass at home. If you really believe COVID is not real, prove it,” he says.

Arena’s video has since been viewed more than 3 million times. He says he made the video a week after his wife was released from the hospital, when he found out that most patients who are hospitalized with COVID are unvaccinated.

“It boils my blood as a caregiver that cancer patients are put in the back of the line,” he told the Daily Dot, “and made to feel like a burden … that [they] don’t have a chance.”

He said it was especially painful for him and his family, as they were in full lockdown mode throughout the pandemic so they could ensure that his wife, who has been battling cancer since 2014, was not at risk of contracting COVID.

Everyone in his family, except for one child who is 9, got vaccinated as soon as they were qualified, he said. “We saw the vaccine as the light at the end of the tunnel,” he said.

The family even managed to take a mini vacation before his wife’s cancer came back late in July—which is why they were at the hospital for her treatment, he said. He did not disclose the name of the hospital out of fear of reprisal.

He said they arrived at the hospital at 4:30am but weren’t taken to the ER until four hours later, at 8:30am. And he said they did not get a room until 9pm that evening.

Even though the doctor ordered a scan and his wife’s blood pressure to be lowered before their departure, they were asked to leave within two days—before those issues were remedied.

She was also due for a liquid draining procedure, which also did not happen before she was discharged, Arena said, adding that they had to go to a clinic the next morning to complete the procedure.

Arena’s video garnered a lot of sympathy and support.

“Hospitals should deny anti vaxxers treatment, period,” wrote one user. “You can’t pick and choose when you ‘feel’ like trusting in science. When it’s convenient for you.”

“Physician here. Thank you for this and I’m so sorry your wife is suffering the consequences of others believing in conspiracy theories,” wrote another.

“Right On Brother! Antivaxers should be put at the end of the line,” a third said.

Some anti-vaxxers commented on his video to say that they believed in the pandemic, just not the vaccine.

“I’m not vaccinated & it’s not that I don’t think COVID is not real. I know its (sic) real. So does every unvaccinated person,” wrote one user. “It’s the vaccine we don’t trust.”

He also received messages from people who seemingly changed their minds after viewing his video.

“I just wanted to thank u u changed my outlook, lost someone because of no room, ime getting the shots bro thanku,” wrote one user on a followup that Arena posted on Wednesday.

Arena told the Daily Dot that he simply wants anti-vaxxers to be consistent in their beliefs. “All I want you to be is responsible, and part of being responsible is having integrity, and having integrity means standing by your belief,” he said of what he expects from them.