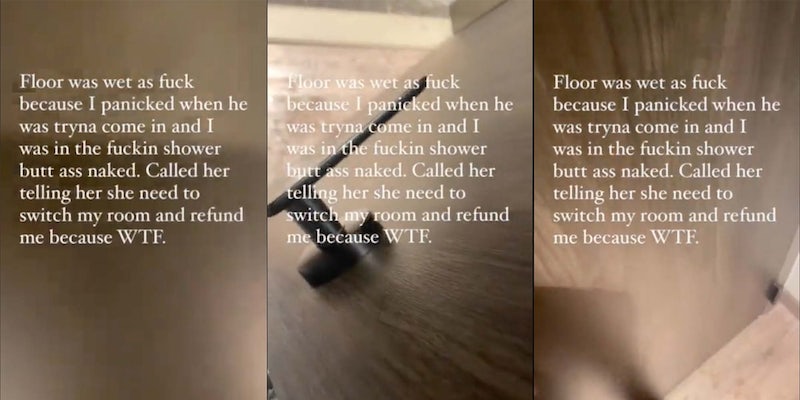 Black woman says man repeatedly tried to break into her room at 1am in D.C. hotel, suspects trafficking ring (updated)

In a viral Twitter thread posted on Wednesday, Maya Angelique (@moneyymaya on Twitter) says that while staying at the Cambria Hotel in Washington, D.C. on Oct. 11, a man attempted to break into her room at 1am ET.

The man had a key to open her door, but she had locked her door from the inside. Angelique said he repeatedly screamed, “Open the fucking door.”

“Hotel management said it was ‘housekeeping’ trying to come into my room at 1am,” wrote Angelique in a screenshot on her Instagram story that she posted on Twitter. “And completely unannounced?” Angelique also said that the woman working the front desk told her she was “aware of the situation.”

A spokesperson for Choice Hotels, which manages the Cambria, tells the Daily Dot in a statement: “We are highly concerned about the incident at a franchised property in Washington, DC that we recently learned about, and we are in contact with hotel management to conduct a full review and investigation of that incident and of reports of other guest experiences. We take the safety of guests seriously, and it is always top priority for us and for the owners of our independently owned and operated hotels.”

After demanding a refund, Angelique was granted one and moved to a new room.

“I literally barricaded the door in the new room and was afraid for my life,” she tweeted.

Her experience at the Cambria Hotel led her to believe that the hotel and/or its employees are involved in human trafficking.

“When black girls go missing no one gives AF about us,” she continued. Angelique also tweeted that friends of hers have been “kidnapped, raped, and murdered.”

The responses to Angelique’s thread were full of similar experiences people had had at the Cambria Hotel. Many posted screenshots of Google reviews of the Cambria, and links to tweets that call the hotel out.

“Don’t stay at the Cambria Hotel in DC unless you want to be kidnapped and or assaulted by the employees,” tweeted Kayla Martin (@KayyylaMartin).

Martin identifies herself as the sister-in-law of Matt Corasanti, who posted a Google review of the hotel saying that he saw “a girl getting dragged unconscious with no shoes or belongings with her into the elevator.” He said that he and his wife were then “evicted” from the Cambria.

The Daily Dot has not been able to independently verify any of these viral claims.

In response to Corasanti’s review, Cambria General Manager Aaron Caple wrote that police were contacted and they they conducted an investigation based on the “severity of the allegations.” He also called the people involved “intoxicated patrons.”

Another review about the hotel describes an experience similar to Angelique’s. Nikita Purvis wrote that someone “tried to gain entry” into her room after a different person attempted to take her room keys while she was riding in the elevator.

“No one on your staff even attempted to help me,” wrote Purvis. “I was seriously afraid and left without anywhere to go.”

Caple responded to Purvis’ review expressing his availability to “discuss” her stay with her.

In addition, a review of the hotel left on its official website describes men running into the hotel and making female guests uncomfortable.

Another tweet in response to Angelique’s says that a woman entered a hotel room at 5am and “left when she saw” that the guests in the room were awake at the Cambria Hotel in Chicago.

Both Cambria locations are owned by Choice Hotels, a subsidiary of Wyndham Hotels and Resorts. In 2019, Wyndham was sued for $10 million for child sex-trafficking. A woman who said she was raped as a child at Wyndham-owned motels in New York City claimed they “turned a blind eye” to her situation, per Yahoo. Adds Yahoo:

Her lawsuit claims franchises of Wydham Hotels & Resorts, which owns Howard Johnson, and Choice Hotels Corp., which operates Econo Lodge, overlooked “the open and obvious presence of sex trafficking on their properties.”

The lawsuit is still pending.

“This is literally every woman’s worst fear,” tweeted Angelique, who also tweeted that she didn’t feel safe at the hotel even before someone attempted to enter her room. “It does not matter what guns we own or how much we protect ourselves if someone intends to hurt us they will.”

The Daily Dot has reached out to Angelique, Corasanti, and the D.C. Metro Police.

Updated 4:50pm CT, Oct. 14: This story has been updated with comment from Choice Hotels.

Updated 4:30pm CT, Nov. 1: D.C. Metro Police emailed the Daily Dot a copy of a police report filed by Maurice Cortez, possibly the same Maurice mentioned by Corasanti in his Google review. Cortez reported an “incident involving possible sexual overtones” on Oct. 9, 2021, the same night that Corasanti stayed at the hotel. The report specified that the incident is being investigated by the D.C. Metro Police’s Sexual Assault Unit.