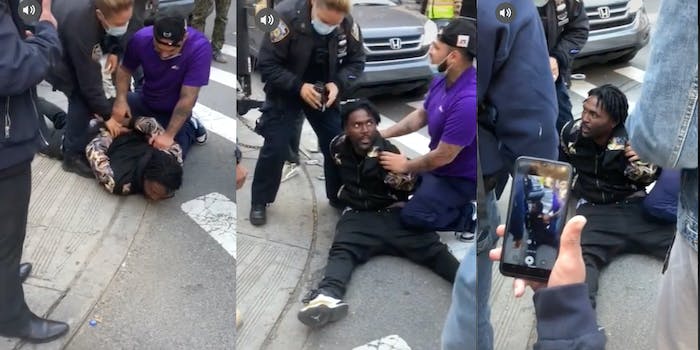 ‘That’s what you get for hitting a woman’: Bystanders apprehend man who allegedly beat up Asian senior citizen

Amid an uptick in violence against Asian Americans, some community members are apparently taking justice into their own hands.

Videos posted to Twitter and TikTok captured people chasing down a man and pinning him to the ground after he allegedly beat up an Asian senior citizen.

“That’s what you get for hitting a woman,” another says.

It’s not clear who the attacked woman or who the perpetrator is. Toward the middle of the video, though, it looks like a police officer comes to assist the citizens in apprehending the man, who is face down on the pavement.

But the rise in anti-Asian violence over the past year is well documented. Stop AAPI Hate, a reporting center that tracks and responds to hate crimes against American Asians and Pacific Islanders, received more than 2,500 reports of attacks nationwide between March and August of 2020. Since the start of the pandemic in March, New York Police Department data also reports a 1,900% uptick in anti-Asian hate crimes.

In the comments of the TikTok video, several people applauded the community members for their actions.

“Amazing people!” one commenter wrote. “See how they detained him without excessive force and still [ensured] he was arrested and held accountable for his actions.”

“STOP BYSTANDER EFFECT,” another wrote. “This is *exactly* what all of us should do when we witness acts of discrimination or injustice against innocent people.”

The Daily Dot has reached out to the New York Police Department for more information.