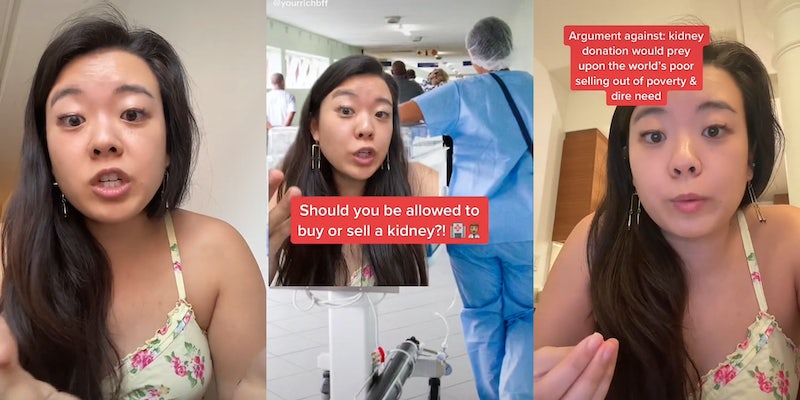 ‘There is no correct answer’: Influencer’s video on buying, selling kidneys sparks debate

The 2010 film Repo Men starring Jude Law and Forest Whitaker depicts a dystopian future where human organs are financed to individuals who are looking for a new lease on life. And when they can no longer pay for those organs, “Repo Men” are sent out to reclaim that property. It’s a brutal, sci-fi take on the state of healthcare in the United States and what happens when a corporate republic goes unchecked in monetizing just about every single aspect of humanity imaginable.

Fast forward to 2022, and now there are people discussing whether or not human begins should be allowed to sell their own organs for profit in viral TikToks.

If you’re familiar with the @yourrichbff account, then you’ll be very well acquainted with Vivian Tu. She’s built a massive following with well-edited videos providing concise money-saving and investment tips for individuals looking to make better-informed financial decisions and investments.

Her website reads: “I’m a University of Chicago grad, ex-Wall Street Trader, Strategy Sales Partner at a Tech company, and YourRichBFF. I have a passion for financial literacy and helping others feel empowered to make strong financial decisions in their own lives.”

She’s been highlighted/interviewed by various media outlets and praised for her charismatic and enthusiastic presentation of financial principles.

A recent post from the influencer references a New York Times article about a “booming kidney trade” in Afghanistan that “preys on the poor.” Impoverished Afghans are selling their kidneys for high prices in order to support themselves and their families.

Tu begins her post by asking: “Should you be allowed to buy or sell a kidney?”

In the video, Tu sums up the article, which isolates a particular hospital in the region where “doctors turn a blind eye to how donors and recipients find each other.” The healthcare center specializes in kidney transplants.

She says that the story made her think about moral/ethical issues “stemming back to money.”

The National Organ Transplant Act of 1984 made it expressly illegal for individuals to buy and sell organs in the United States, the law still stands today, as of publication.

Tu provides an opposing argument for people being allowed to sell their kidneys for cash in a red TikTok text overlay: “Argument against: kidney donation would prey upon the world’s poor selling out of poverty & dire need.”

She says that many of the people who sold their organs in this piece did so in order to get money to afford an operation for another loved one, pay for food, or settle outstanding debts. “Most of them regret their decision,” she says.

Tu then postulates a supporting argument in a green text overlay: “Argument for: would organize business transactions, reduce trafficking, and make the surgical operations safer.”

She ends her video by saying, “Obviously there is no correct answer, but I wanna circle back to my earlier question: do you think we should be allowed to buy and sell kidneys?”

Tu added in the comments section: “I found this to be an incredibly thought provoking read and immediately made my friends debate the topic gotta keep my circle critically thinking.”

Many users rejected the idea to allow the legal buying/selling of organs.

“100% no. Esp in a capitalist system and living thru scandals,” one viewer wrote. “This opens up Pandora’s box and would worsen things going on in poor countries.”

“While this is a complicated issue, I believe the organ market is incredibly dangerous to poor and vulnerable individuals. It is unfair and unethical,” another added.

“Absolutely not. In this capitalism, the organs would be priced in a tier system soon like CHEAP KIDNEY and KIDNEY FROM A WEALTHY TOWN,” a third chimed in.

There were others who expressed that they didn’t see a problem with allowing people to buy and sell kidneys as they wished.

“Well you can buy & sell other things that put you more at risk: your house, medicine, etc. So why not? It’s saving a life since we can’t grow them yet,” one viewer suggested.

“Since there is already a black market, making it legal would make it safer for the poor who sell,” another argued.

And then there were those who proposed other solutions: offering cash bonuses to random donors through a systemic structure similar to the one we already have implemented for donor matching.

“As someone who has kidney disease, I think random donors should get some compensation to encourage more donors,” one user claimed.

“I think in the US it could be reasonable to allow donors to be paid. BUT it would require extreme ethical awareness and rigid standards by hospitals,” another said.

The Daily Dot has reached out to Tu via TikTok comment and email.