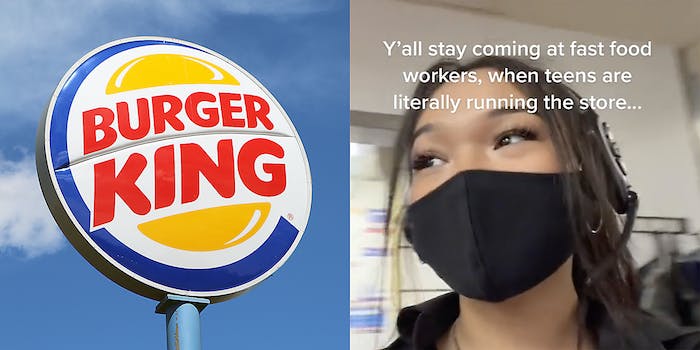 'We responsible for counting the cash cleaning everything and closing the store while we 15.'

A teenage Burger King manager claimed that teens are “literally running the store” in a viral TikTok, sparking a conversation surrounding teen fast-food workers in the comments section.

TikToker Maliyah Moeun (@liyahmarmo) is a 19-year-old Burger King employee, according to her video and TikTok bio. Her TikTok claiming that teens are responsible for running her Burger King got over 56,700 views since being posted on Thursday.

As of 2021, the average age of a fast-food worker is 24 years old, and only around 30% of fast-food workers are teenagers. Some viewers pointed to this in the comments section.

Others remarked on how some fast-food places rely on young workers to keep the locations afloat and sympathized with such workers for “[having to] deal with those dam annoying customers.”

“We responsible for counting the cash cleaning everything and closing the store while we 15,” @_andres_885 siad.

“literally been managing since 16 too,” another claimed.

According to a Center for Economic Policy Research policy issue: “One argument frequently made against higher wages for fast-food workers is that the industry is dominated by teenagers and workers with less than a high school degree, who somehow ‘deserve’ the low wages they receive.”

The Daily Dot reached out to Burger King via email.

Update 5:11pm CT Feb 24: The Daily Dot has reached out to @liyahmarmo via TikTok comment.