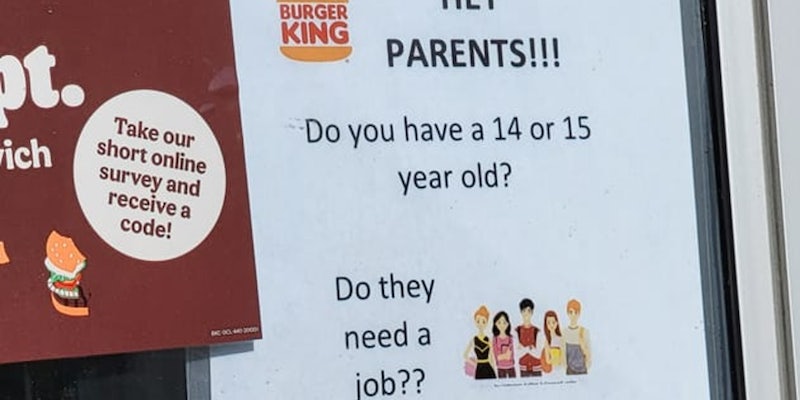 An image of a sign posted in the drive-thru window of a Burger King is causing controversy for asking parents to get their children to apply for a job there.

The sign reads: “HEY PARENTS!!! Do you have a 14 or 15 year old? Do they need a job?? We will hire them! Ask for an application!!” It appears to have been originally posted to Facebook by a man who tagged a Burger King in Lorain, Ohio. The minimum legal working age in the state is 14 years old.

The original poster suggested that working at a young age builds character, writing, “Teach them young what it is to earn a $1.” The comments are full of folks tagging people who may want a job at the fast-food chain. However, Twitter users who have gotten ahold of this image are more critical of the message.

“They’ve given up on asking adults to work for starvation wages — now they’re begging for people’s children,” one user said.

“My daughter will neverrrrrrr,” one tweet reads. “No one should permit their child to work shit wages while being mistreated by shit people daily.”

This Burger King debate comes as the phrase “WE ARE CLOSED” trends on Twitter. The “WE ARE CLOSED” trend was inspired by signs at various fast-food places experiencing worker shortages. The Twitter topic highlights worker exploitation, the pay disparity between the average worker and their CEOs or business owners, and the fight for a living wage.