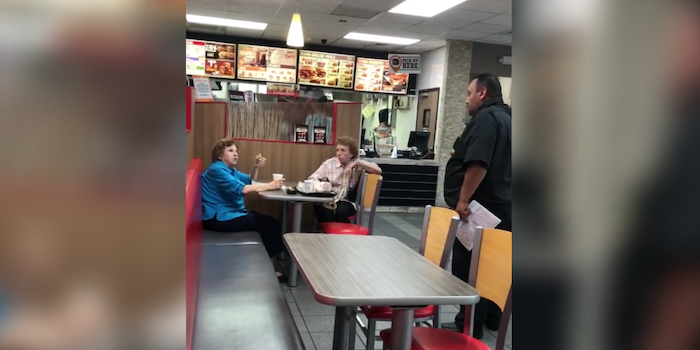 Women tell Burger King manager to ‘go back to Mexico,’ get kicked out

'Our main language is English. Speak your Mexican at home.'

Two elderly women were kicked out of a Florida Burger King after telling the manager to “go back to Mexico” when they heard him speaking Spanish on Saturday.

Neyzha Borrero captured the exchange on video and posted it to Facebook, where it quickly went viral.

This just happened right in front of me!!!! I had to record!!! “This is AMERICA! we speak ENGLISH” “GO BACK TO MEXICO. Speak “Puerto Rican” or “Mexican” at home!” Puerto Rican Manager at Burger King gets discriminated only because he spoke to his employee in Spanish in front of them. #burgerking #discrimination

The women felt the need to address Ricardo Castillo, the manager, after they heard him speaking Spanish with an employee. One of the women told Castillo he should not speak “Mexican” in public.

“This is America,” the woman says. “Our main language is English. Speak your Mexican at home.”

Castillo maintains a calm demeanor as the women continue to berate him, with one telling him to “go back to your Mexican country.” Castillo is actually from Puerto Rico.

“You’re in America; you should speak American English,” the woman says. “Go back to Mexico if you want to keep speaking Spanish.”

“Go back to Mexico,” they say.

Turns out the man they berated is the manager. And he kicked them both out. ✊🏾❤️✌🏾pic.twitter.com/QkEHsTC4rt

Castillo finally stands up, points toward the door, and tells them to leave.

“Guess what, ma’am,” Castillo says. “I’m not Mexican, but you are being very prejudiced. I want you out of my restaurant right now. ”

The woman tells Castillo that she will leave after finishing her meal, but Castillo had enough.

“You are very ignorant and very disrespectful,” Castillo says. “Have a great day and get out of my restaurant.”