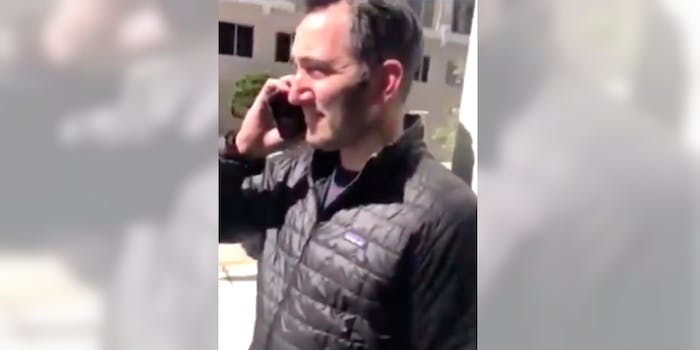 'My father was murdered outside his home by a trespasser who he confronted alone.'

A YouTube executive called the police on a Black man who was waiting for his friend outside of her apartment building. Now, he’s apologizing, citing his father’s murder as an explanation.

Christopher Cukor, a white man, was leaving his San Francisco apartment building with his son when he stopped to call the police on Wesly Michel, who Cukor claimed was trespassing.

The incident was resolved when Michel’s friend, who he was waiting for, showed up. A few days later, on July 9, Cukor issued an apology in a Medium blog post.

“My father was murdered outside his home by a trespasser who he confronted alone,” Cukor wrote. “For my child’s safety, my safety and that of the building, I felt it was necessary to get help in this situation. Furthermore, I’ve encountered trespassers in my building and we’ve been robbed several times. This is not uncommon in San Francisco and the bad actors are all different colors.”

According to SFGate, Cukor’s father was killed in the driveway of his home in 2013, after confronting a man with schizophrenia who was attempting to enter Cukor’s home.

While Michel was filming his video, he told Cukor that he would be “the next person on TV,” presumably for calling the police on a Black person for no apparent reason.

“Unfortunately, there is a terrible pattern of people calling the authorities regarding people of color for no other reason than their race,” Cukor wrote. “The last thing I ever intended was to echo that history—and I’m sorry my actions caused Welsy to feel unfairly targeted due to his race.”

Cukor said he hopes Michel will see his apology. Neither party immediately responded to the Daily Dot for comment.