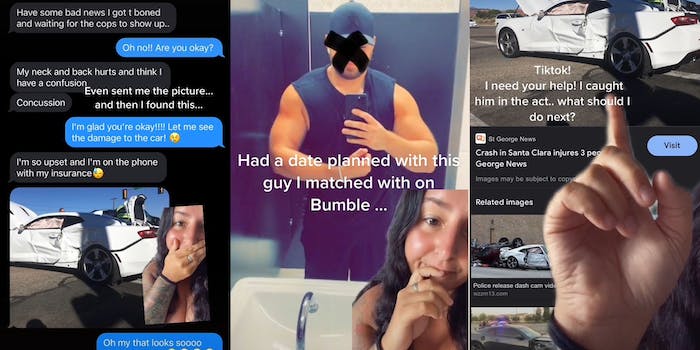 ‘Guys are really out here with the nerve and audacity’: Woman exposes Bumble match for faking a car accident to cancel their date

'People will literally go to any lengths to lie!'

In a viral TikTok, a woman exposes her Bumble match who she claims faked a car accident to cancel their date, even using a Google image of a car accident from the news to fool her.

Sami Oliveri (@guts_and_glory13) uploaded the viral TikTok on Monday with the caption, “Single life in Tampa be like..”

The clip starts off by showing her Bumble date’s picture with his face covered. In the text overlay, she writes, “Had a date planned with this guy I matched with on Bumble…”

“He then texted me almost an hour before the date and said he got into a CAR ACCIDENT !!” the text overlay reads.

Behind the text overlay is their text conversation, in which he wrote: “Have some bad news I got t boned and waiting for the cops to show up..”

Oliveri replied, “Oh no!! Are you okay?”

“My neck and back hurts and think I have a [concussion],” he replied.

“I’m glad you’re okay!!!! Let me see the damage to the car!” Oliveri texted back.

“I’m so upset and I’m on the phone with my insurance,” he wrote back, even sending a photo of a white Chevrolet Camaro that appears to be damaged.

“Oh my that looks soooo badddddddd,” she replied.

“Even sent me the picture,” the text overlay reads. “Then I found this.” The clip changes to a Google Image search result for “camaro car crash,” where the picture her date sent shows up. Turns out, the image is from a 2018 car crash in Utah.

“Tiktok!” The text overlay reads. “I need your help! I caught him in the act.. what should I do next?”

Commenters told Oliveri to “send him the screenshot.”

“God. Tampa area dating is so toxic. I’m over it,” another commenter said.

Another said, “Next. Don’t even confront him, bc why does it matter? It’s not going to improve your life just move on to the next.”

One TikToker asked why Oliveri used a Google image reverse search, calling the act “so strange.”

Oliveri replied, “Just have to be careful out there. Never know who you are dealing with. Totally normal to check and see if he was telling the truth or not.”

Others shared their own similar experiences.

One user said, “OMG! This has literally happened to me! People will literally go to any lengths to lie!”

Another agreed, “Guys are really out here with the nerve and audacity.”

The Daily Dot has reached out to Oliveri via TikTok comment.