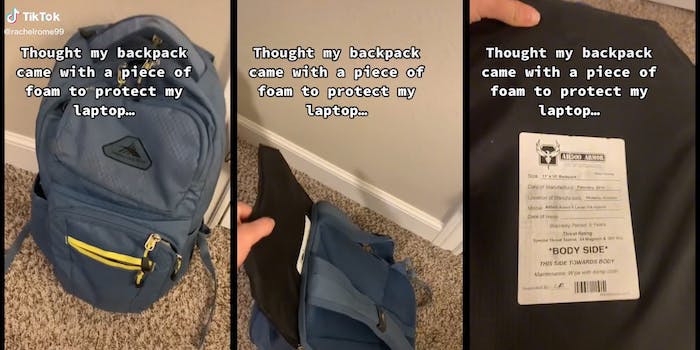 A TikToker thought her backpack came with foam to protect her laptop. Turns out, her father put a piece of Kevlar in it (updated)

'So sad they even have to think of that in the US.'

School shootings, and the fear surrounding them, are on the rise. According to a report put out by Education Week, there have been 114 school shootings in the U.S. alone since 2018. In 2022 alone, there have reportedly been 22 shootings, with the most recent shooting occurring on April 5 at a high school in Erie, Pennsylvania.

In response to this increased awareness and fear, many parents have taken protective measures to ensure the safety of their children. This can include training their children on gun safety, giving them defensive training, and outfitting their school supplies.

On Thursday, TikToker Rachel (@rachelrome99) posted a video of a discovery she made in her school bag. While she thought her backpack just had an added pad for laptops, she later discovered that her father had put a sheet of bulletproof Kevlar in the bag.

Rachel posted a video of this discovery to TikTok, where it quickly accumulated over 1.3 million views.

“Thought my backpack came with a piece of foam to protect my laptop,” the text overlay reads.

“Turns out my dad put Kevlar (bullet proof material) in it years ago and forgot,” she wrote in the description. “Won’t catch me lackin.”

Rachel clarified in the comments section that her dad did not put the Kevlar in the backpack for her protection in case of a school shooting. “This used to be my dad’s work backpack (police officer),” she said. “He was sent the kevlar for free, and put it in his bag.”

“I grabbed it from the family closet to use for school,” she continued.

She said the only point of the video was that she “thought it was funny” that she didn’t realize what the Kevlar was.

Before Rachel made this clarification, many TikTokers assumed Rachel’s father added the Kevlar as a safety measure for his daughter.

“Instant sadness,” one commenter shared. “I love your dad did that for you. I’m sad he thought you may have needed it.”

In 2019, CNBC reported on the growing popularity of bulletproof schoolwear. The report shared that, while there is a disagreement about the real-world effectiveness of bulletproof bags, as the bulletproofing used is often not strong enough to resist attacks from assault rifles, which have been used in several recent high-profile school shootings, many parents feel it is a necessity if solely for peace of mind.

“I’m not sure it would do much good, but I can see the marketing reason for it,” Jeff Scheidler, a St. Louis, Missouri resident told CNBC. His wife Heidi later added, “But will I feel like a bad parent without them for my kids?”

Fears of a school shooting are common among both parents and students alike. A 2018 YouGov survey released by the Children’s Defense Fund indicated that 33% of children between ages 6 and 17, and 36% of parents, report worrying about school shootings.

In comments, many told stories about their parents buying them bulletproof school gear in response to such fears.

“I thought my dad was the only one who did this,” one user wrote. “I’ve had a piece of Kevlar in my lunchbox since 6th grade.”

“My dad did this for me [too] and got me a ‘stylish’ bullet proof vest so I could wear it out and no one would know,” another detailed.

Other commenters shared that they did, or had plans to do, something similar for their own children.

“I thought I was [the] only dad doing this,” one user commented. “Now I don’t feel so crazy.”

“I have one in each of my kids backpacks… and [I’m] glad I do cause my daughters school has had threats,” a second explained.

“This is sad this is the reality but I am very grateful for the idea,” a third contributed. “I will add these to my kids backpacks!”

This story has been corrected to reflect Rachel’s updated comments, in which she clarified her father did not put the Kevlar in the backpack for her protection in case of a school shooting.