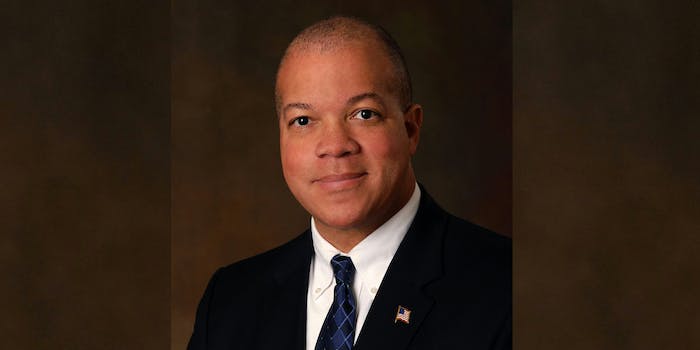 A Republican lawmaker from Florida, because where else, is kicking off Pride Month by refusing to apologize for joking about executing homosexuals.

State Rep. Mike Hill was recently caught on audio by the Pensacola News Journal having the following exchange at a meeting:

Constituent: “In 1 Corinthians, it says that a man who has an affair with another man will be put to death.”

Hill: “It says that in the Old Testament, too.”

Another constituent: “Can you introduce legislation?”

Hill joins in on audible laughter: “I wonder how that would go over?”

After he got caught with his yukety yuks in a stunningly homophobic jar, Hill hid out for a while.

State Rep. Carlos Guillermo-Smith, an Orlando Democrat and the state’s first openly LGBTQ representative, was not amused. In a series of tweets, Guillermo-Smith, himself a survivor of anti-gay hate violence, took his fellow legislator to task, demanding Hill apologize or resign.

What was @MikeHillfl thinking when we taped this greyhound dog protection video? Was he thinking I should be stoned to death as a gay man? Was he thinking DOGS deserve more protection than LGBTQ people like me? How can he espouse such bigoted views and work alongside me? pic.twitter.com/VFWhH2KDl5

In response to Guillermo-Smith, Hill tried to claim that the whole thing was just “fake news,” which is Republican code for “I don’t like how this true story makes me look,” and that he was being attacked for his anti-choice stance, not because he chuckled along with a crowd who believes gay people should be executed.

With calls for his resignation continuing to pour in, Hill tweeted on June 1 to complain he was the victim of a social media lynching.

Though a few did come to Hill’s defense, by and large comments below the pouty tweet were well south of sympathy, with a few intrepid folks even digging up an old homophobic tweet of his from 2015.

So then prove you don’t believe it. Denounce the hate speech, apologize for feeding into the conversation and donate to a group that helps LGBTQ kids like @TrevorProject – Jesus welcomed all, now it’s your turn to prove you believe the same.

How about these statements & others? If you thought that statement was something to laugh & joke about & that LGBT people are the cause for “gods judgement” then the @pulseorlando massacre must have been hilarious for you. pic.twitter.com/vZ5blBeJZU

Maybe we should joke about slave owning and you being property since the bible openly promotes slavery.

You know what isn’t right? “Joking” about killing LGBT Americans as Mike Hill did.

Hill, remarkably, chuckled about executing gay people while aware that a reporter was in the audience, which he admitted when asked how audio from the meeting was “leaked to the media” in the first place.

Hill, whose truly exceptional legislative career includes sponsoring 30 bills and having every single one of them die on the floor of the Florida legislature, is a champion of all things absurdly right-wing, as one imagines is contractually obligated of him as the founder of the Northwest Florida Tea Party.

More recently, he was in the news for saying that God told him to ban abortion.

He also believes that oaths of office are invalid unless taken on a Christian bible. “Someone who wants to take an oath on a Quran, it means nothing,” Hill reportedly said.

As committed as Hill seems to be for making a name for himself as a force of intolerance and forced birth, someone may want to tip off the Republican from Pensacola that perhaps next time he could choose a better moment than the first day of Pride Month to double down on how it’s A-OK to joke about killing gays.

Unless getting attention for being a bigot was his intention all along.