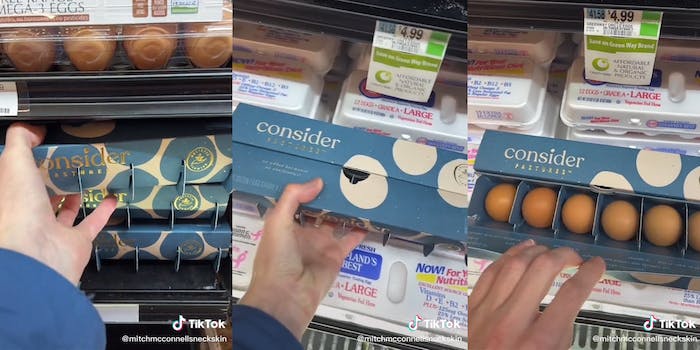 ‘Are them yolks made of gold’: TikToker buys $8.99 ‘bougie’ eggs in fancy packaging, sparking debate

Some viewers said it was 'well worth the money' for pasture-raised eggs.

In a TikTok posted on Jan. 24, @mitchmcconnellsneckskin shows a carton of eggs from Consider Pastures. The box looks to be made from printed paper, rather than plastic or styrofoam, and opens from the middle instead of the side.

“Listen, I get it. I like nice things. I have an iPhone. But I’m here in the grocery store in the egg aisle and what are these?” the TikToker says, showing the Consider carton. “What kind of bougie chicken?”

In the caption of the video, the TikToker wrote that he is “so confused.” The TikTok has received over 391,000 views.

“I think they’re ethically sourced so I’m all for bougie eggs,” the TikToker continued in the caption.

And the TikToker seems to be right. On its website, Consider Pastures says its eggs are “cultivated without compromise for a more considered world.” Consider also calls its eggs “the pinnacle of quality” and “speckled beauties” that are “tucked into [their] cartons.”

“Call it what you want,” Consider’s website reads about its egg cartons. “We’ve heard extra, bougie, and luxe, among other things.”

In a follow-up, the TikToker said that he paid $8.99 for a carton of Consider’s eggs. As a joke, he also unboxed the eggs alongside an Apple charging chord and stickers, as if the eggs were an Apple product.

In a statement to the Daily Dot, a representative for Consider Pastures said, “While it’s true Consider Pastures eggs do not come with a charging block, they do come from hens raised according to Certified Humane® Pasture Raised standards on small farms that take a hands-on approach to farming, committed not just to superior animal care, but to healing our soils through the practices of regenerative agriculture.”

The representative added that in addition to nice packaging, customers are paying for eggs “committed to a healthier planet for us all.”

Some commenters on the original video were baffled by Consider’s packaging but wanted in on the fun. Many praised the paper packaging for being more sustainable than styrofoam. Others, however, were unimpressed by the price.

“What in the Kate Spade?! GIVE THEM TO MEEEE” commented @orelllaa.

“My toxic trait is that I would buy them,” wrote @lindsayycat.

Others explained Consider’s methods were worth the upcharge. User @peaches4_me commented that they raise chickens, and when they aren’t laying eggs, they buy “the expensive pasture eggs.”

“There is a massive difference and well worth the [money],” they wrote.

User @jessiemit also explained what “pasture raised” means for the chickens who lay eggs for consumption.

“They’re outdoor and require 40+ square feet of space per chicken,” they commented. “No cages or cage free which is just tons of chickens piled up.”

The Daily Dot has reached out to @mitchmcconnellsneckskin via TikTok comment.

This post has been updated with a statement from Consider Pastures.