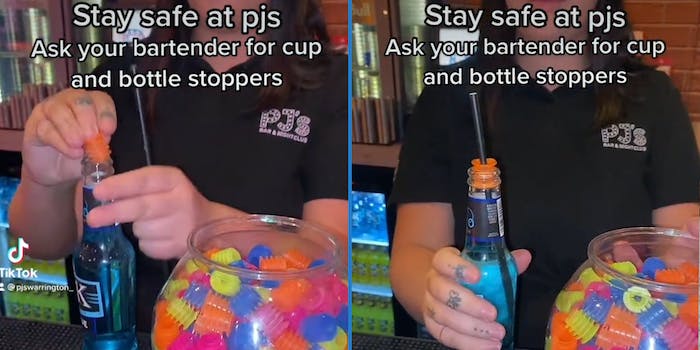 A bar made a TikTok about how it provides bottle stoppers to prevent drinks from getting spiked. Commenters think it’s sad (updated)

'All bars should have these.'

A United Kingdom bar’s viral TikTok promoting anti-spike bottle stoppers gave rise to hundreds of comments regarding the “sadness” of having to take such precautions. Individuals questioned the effectiveness of the bottle stopper, shared stories of their own experiences with drugged drinks, and wrote that “it’s so sad that this is what we have to do now.”

PJ’s, a bar and nightclub in Warrington, England, posted a TikTok Saturday of a bartender sticking a colorful, plastic protector into a bottle with the caption “stay safe at PJs.” The caption told viewers to “ask your bartender for cup and bottle stoppers.”

The video, which has accumulated over 6.8 million views, has over 342,000 likes and over 1,500 comments from individuals urging for this product to be “in all pubs and clubs across the world.” While some commend the efficiency of the bottle stopper, some questioned whether it could prevent certain attempts at spiking.

One commenter wrote, “If you were to be spiked, couldn’t you just pour the powder or whatever into the straw?” Another said, “I worked as security at a bar for almost a decade. It’s very rare to spike a drink you already have. It’s when someone brings you a drink you.”

PJ’s, which did not immediately respond to the Daily Dot’s request for comment, wrote that spiking “can happen anywhere” and that they are “thinking about customers safety.” The bar’s TikTok account, which has over 4,000 followers, wrote that the bottle stoppers are free for all.

The drink stoppers seem to be made by Impact Attack, a U.K. business selling self-defense tools. The shop also shares information and resources on how to stay safe during a night out.

A spokesperson for Impact Attack told the Daily Dot that it has “seen a huge rise in the popularity of our bottle stoppers but also in all of our spiking prevention accessories.”

“This is due to the huge increase in spiking across Britain and during 2021, incidents of students’ experiences of spiking became apparent in UK news. The National Police Chiefs’ Council reported over 200 cases of drink and drug spiking incidents had been reported to the police across September and October 2021,” it said. “Due to spiking levels reaching an epidemic level in the UK, students created a movement called ‘Girls Night In’ with the aim to boycott bars, nightclubs and venues in protest of spiking.”

Numerous comments mentioned how the need for bottle stoppers is “sad” and one commenter wrote that “these should automatically be provided and handed out with your drink.” Another wrote, “I’ve been fortunate to not become a victim of this so far in my life. I’m asking genuinely, out of paranoia. Could it still fit in the straw?”

Others urged viewers to remain cautious, “One day we will have a world where nothing like this is needed, stay safe people.”