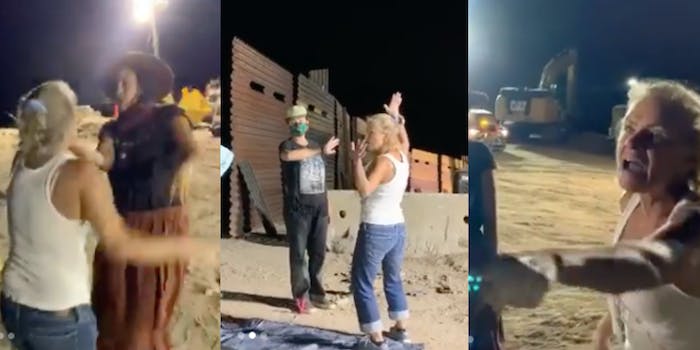 A Karen attacked a group of Indigenous Americans in Southern California as they peacefully protested a border wall.

A group of Defend Kumeyaay Land members chose to turn their collective cheeks as a belligerent and aggressive Karen opposed the Kumeyaay’s peaceful protest against President Donald Trump’s infamous border wall construction on their land.

“Tonight we experienced a violent woman who tried to tear our tents down,” the group stated on Instagram, where they posted a video of the incident. “We de escalated and stayed non violent. We used songs and prayers again just like how we non violently stop desecration to the land.”

The Instagram video starts with the “border wall Karen” being told she is being recorded. The woman explains, using many expletives, that she doesn’t care.

The woman repeatedly physically attacks the non-violent group, who tell her, “Do not touch us” and “Please walk away.”

“We’re not using violence,” they say.

She tells them that the land is “her community” and to “get the f*ck out of here.” Shortly after, she proceeds to mock them for praying to their ancestors. She even dances and hops around, mimicking Native American dance rituals, as they begin chanting.

In August, La Posta Band of Diegueno Mission Indians, who are amongst the 12 bands of Kumeyaay people, filed a lawsuit in federal court against the Trump administration. The group is attempting to stop the construction of the border wall through the sacred burial lands.

“If these sacred places are allowed to be desecrated, Kumeyaay children will never be able to learn about these places, and thus would be deprived the opportunity to understand their cultural and religious heritage fully,” the lawsuit states. “Defendants are currently constructing the border wall directly through Kumeyaay burial sites, and sacred lands, causing irreversible and easily avoidable damage to Kumeyaay remains, cultural items, history, and religious practices.”

According to the complaint, Jacumba, an area known to contain an ancient tribal cemetery, and Tecate, Mexico, also a historical Kumeyaay village site, are both located in the project path for Trump’s long-promised wall. Cultural surveys and Kumeyaay historians have noted the existence of human remains and archaeological sites along the path.