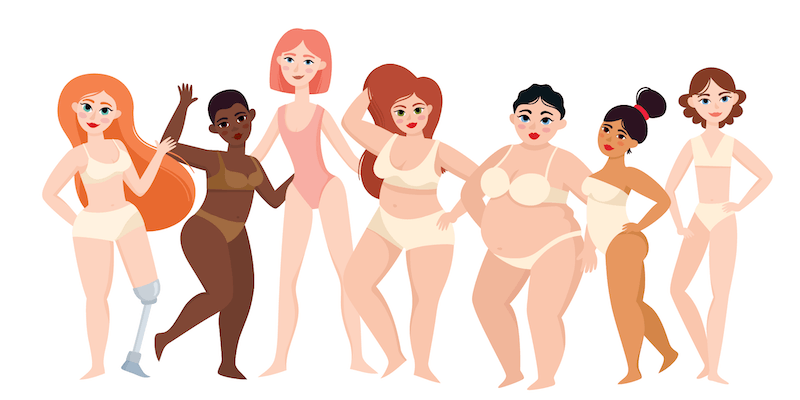 Who is #BodyPositivity for? It depends who you ask

The hashtag has ignited a social media war.

Actress and YouTuber Teala Dunn recently posted a video of herself trying on bikinis and dancing around in front of the camera. “Hot girl summer is all about loving the skin that God gave you. Body positivity,” she tweeted on Aug. 1 to her 1.9 million followers, getting over 1,000 likes.

Some people might see a regular post from an influencer. But to many others, it’s frustrating to see a thin woman using the term “body positivity.”

The body positivity movement, of course, extends beyond a hashtag people use to post selfies on social media. The fat acceptance movement started in the 1960s with the National Association to Advance Fat Acceptance (NAAFA), created by a man who was tired of watching his wife experience discrimination. Since its founding, NAAFA is among the most prominent groups advancing the rights and interests of people who are overweight.

And like everything, the body positivity movement changed with the arrival of the internet. The 2000s saw the rise of the “fatosphere,” a blogging community by fat people for fat people, full of encouragement for people to embrace who they are and how they look. The movement morphed and adapted to social media, where plus-size content creators like Stephanie Yeboah use Instagram and Twitter to spread messages of fat acceptance to thousands of followers. And brands from Allure to H&M to Dove jumped on what they perceived as a new marketing trend, although not all embrace fat acceptance as overtly.

Not everyone is aware of the complex history of the body positivity movement, and newcomers may think it’s all about sharing good vibes about your body. As the trend of sharing photos with #BodyPositivity spiked over the summer, many complained that the hashtag was infiltrated by people it wasn’t intended for.

let’s do a body positivity thread, drop your pics so we can show sum love <3 pic.twitter.com/uFpsPGFBvh

Hayley Hall, a 30-something British beauty blogger, said body positivity is supposed to be the “celebration and acceptance of body shapes and types that have historically been shunned by the mainstream media or not necessarily classified as beautiful,” but it’s shaping into something else.

“It’s moved away from the celebration and representation of different body types, to traditionally beautiful bodies showing off every imperfection and calling it empowerment,” Hall told the Daily Dot via email. “Just because you don’t look like a [Victoria’s Secret] model does not mean you’re not represented or accepted in the wider world.”

Hall said she’s frustrated by relatively thin women who point out minor flaws in themselves in an attempt to be part of the movement, and these people are confusing body positivity with body acceptance or self-love and respect for one’s body.

“As someone who’s always struggled with their body, seeing slim girls in their underwear bending over and showing off their ‘rolls’… just undermines what the body positivity moment has been trying to create: a sense of inclusion and normality around different body types,” Hall said. “It’s patronizing and potentially damaging to those really struggling. I’m all for loving the skin you’re in, no matter your shape or size, but for me it screams of jumping on a trend or a movement for likes and attention when it was designed for everyone but them.”

Twitter user @anactualfairy, real name Katie, might fall into the category of people Hall is talking about. But she doesn’t think body positivity should be so restrictive.

“Stop acting like people you perceive as skinny can’t be part of body positivity,” Katie said in a July tweet that got over 1,100 likes. “I know I technically am considered thin but many days I still hate myself. Every time I post my body it’s a direct ‘fuck you’ to my [eating disorder] and me pushing myself in recovery.”

stop acting like ppl u perceive as skinny can’t be part of body positivity. i know i technically am considered thin but many days i still hate myself. every time i post my body it’s a direct “fuck you” to my ED and me pushing MYSELF in recovery.

Katie told the Daily Dot when she tweeted, she didn’t know the history of the body positivity movement, but she did some research after her post.

“When I was in treatment for my eating disorder, we did a lot of groups on body positivity, and that room was filled with bodies of all shapes and sizes who all struggled with accepting and loving their bodies, so it never dawned on me that it shouldn’t be ‘for’ me or anyone else at the time of posting that tweet,” Katie said. “I never want to overstep who the movement was made for, but I truly believe there should be space left for all bodies in body positivity.”

Listening is the most important thing people can do to fix the situation, Hall said.

“Every time you try and have a conversation with a slim person about why their use of body positivity isn’t OK,  they’re not prepared to listen,” Hall said. “If you don’t listen to the reasons and justification, how can you learn? … Just because you have an issue with your slightly rounded backside it doesn’t mean that compares to the constant judgment, belittlement and rejection faced by many other body types on a day to day basis.”

Hall said there are bigger problems people should focus on, like how people with larger bodies are treated by men, by doctors, and in the workplace. While advocates for big bodies and the NAAFA have consistently worked to raise awareness and change the social stigma that discriminates against big bodies, some people say such advocacy is the equivalent of promoting being unhealthy.

Body positivity should be everywhere but we should not confuse it with life threatening diseases, this is straight obesity and can cause death. I’m all for accepting all sizes and shapes but this is just pure death. https://t.co/JhJ3KxequM

obese woman: *breathes*
dumb bitches on twitter: UNPOPULAR OPINION but am I the only one who thinks this is extremely unhealthy and shouldn't be glorified????? smh pc culture has gone too far

Gayle Timmerman, a professor of nursing at the University of Texas at Austin, said people should love themselves but also consider their health, regardless of their size.

“People should feel good about who they are,” Timmerman said. “That being said, there is a health risk… The more excess weight you have, the higher the health risk.”

Timmerman said people should think about exercise and eating well so that they can live long healthy lives. But there’s more to health than just weight, she added.

“We have more than just our body,” Timmerman said. “We have our mind and our spirit, and there’s different dimensions you could look at it yourself. So you could have no disease and yet if you’re if you’re totally depressed or you’re anxious all the time, is that health?”

All of these facets tie together in what Timmerman called holistic health.

“There’s a great freedom in being happy with who you are, even though you still have to deal with your health and all that other stuff,” she said.

“There are far better ways to tell your story, without jumping on something not intended for you,” Hall said.