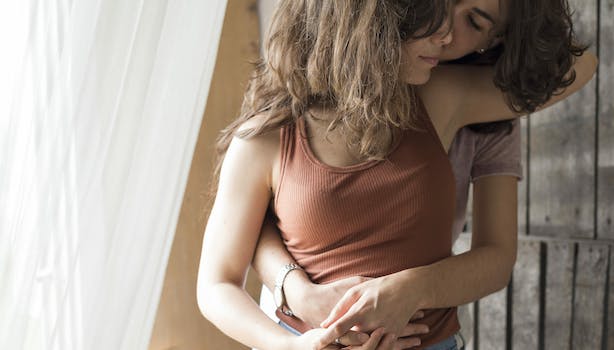 Forget the male gaze—comparing ourselves to other women can be just as detrimental.

I don’t know when the daily weigh-ins started. Maybe 8, maybe 10. Young. Very young. My father was obsessive and, at some point, my weight became the subject of his obsessions. Every morning, he’d act like the idea just occurred to him. “Let’s hop on the scale, just for fun.” It was never just for fun. When the number invariably disappointed him, the shouting started. The anger, the rage. The crying. Eventually, I’d pull myself together, get dressed, and go to school. The next day it would happen again. Just for fun.

I don’t know if the problem is that my body image never really recovered or if it just never developed positively in the first place. My first memories of being aware of my body—not just of its size but its existence—were those weigh-ins. The first thing I understood about my body wasn’t that it made me the only girl in my class who could do a handspring or a split, though that was true. The first thing I knew was that it could provoke vitriol. That it was contemptible. That, as my father told me, it meant no man would ever want to be with me. Which wasn’t the fault of men. But a simple fact, considering what I looked like.

The crash dieting and binge eating were almost a foregone conclusion. It started before I hit junior high and continued through college and beyond: The surviving only on spoonfuls of almond butter for days. The eventual breaking down and eating everything in the kitchen, lying on the floor in a daze and wondering what had happened. I was sure, so sure, that the problem was connected to a fear of what men would think.

It would take me entering into a relationship with a woman to realize it was much more complicated than that.

The first woman I went out with was slim. I sized her up immediately, probably a 2-4, but with hips and boobs. The second was boyish, straight-up-and-down, the kind of skinniness that I had longed for during puberty.

My attraction to these women was one thing—that I had felt for years and drunken hookups were a fairly regular occurrence. But dating felt different. In the cold, sober light of a first date issues of whether or not I was attracted to them was almost drowned out by another part of my brain that was constantly computing how I stacked up. With other women, the potential for side-by-side comparison was always looming: Our hips, height, breasts, that dreaded belly fat. I was consumed by how I compared and, more than that, assumed that they were making the same comparisons. I could not believe that a woman skinnier than I am could be attracted to me.

Before ever entering a romantic relationship with a woman, I found women to be a place of refuge. My female friends supported me through my body issues. So many of them had been there too. We talked about the burden we share as women. We attempted to bolster each other, to snap each other out of it. We understood each other.

But just because I could talk about my body, find others to obsess with me, didn’t mean I could curb the toxic thoughts and behavior. There was the competitiveness with the friend who was also starving themselves—the sick pang of pride when you know you are eating less than they are, that you are punishing yourself more. The feelings of inadequacy next to the female friend who is always one size smaller than you and the perverse smugness next to the friend who is always one size larger. The patronizing approval from a thinner friend when you’ve lost a few pounds, my own condescending encouragement when someone larger than me started to slim down. And the not-so-veiled resentment at the female friend who is always there to listen but, as a size two, obviously has no fucking idea what you could be talking about.

If I was being honest with myself, my body had always had a more volatile relationship with women than with men. In fact, no man after my father had ever commented on my body in any significant way.

“I think that there are two parts to female body image issues,” relationship therapist Aimee Hartstein, LCSW, tells The Daily Dot. “One coming from men and one coming from other women. The more obvious one has to do with the male gaze and the objectification and sexualization of women in society.”

But take the male gaze out of the equation and the problem doesn’t go away. “I think that there is also a level of judgment and competition that exists among women with regards to body image and appearance,” Hartstein says. “I don’t know if it’s the internalized impact of society’s pressures or something that’s actually built in and evolutionary, but it definitely exists. In fact, it often seems that men are more open-minded and forgiving about different body types than women are.”

So it makes sense that research has shown that being in a lesbian relationship does not alleviate body image issues. A study of nearly 500 women from the University of West England found that lesbians were less aware of social pressures when it came to their appearance, leading to misleading heading lines like “Lesbian Women Feel Less Pressure to Have a ‘Perfect’ Body” as though, without men, women can live happy, relaxed lives at any weight. But those headlines ignore the other part of the study.

Interestingly, despite internalizing the media less, lesbians’ issues with body image and disordered eating were the same as straight or bisexual women. “This result was surprising,” study author Caroline Huxley said in a press release. “As the heterosexual women were more affected by media, more aware of social pressures on appearance, and they internalised social ideals of attractiveness more than the lesbian women, we would expect to see a difference in the levels of body satisfaction and eating behaviors. We did not see this in our study.

“One possible explanation could be that although the pressures felt by the heterosexual women affected their appearance satisfaction and eating behaviours, lesbian women faced different pressures that impacted similarly on how they felt about their bodies and their eating behaviours, resulting in the similar levels we found across all of the women in the study.”

Because it’s not about the male gaze. At least, it’s not only about that. Maybe that’s how it started for me, for many, but the expectations and pressures to be thin are often revalidated by women and culture at large. We create a suffocating ecosphere of self-loathing and vigilance and guilt—even when there’s not a man in sight.

“It’s not surprising to me that [your] fear of judgment from other women was greater than judgment from men,” Dr. Erika Martinez, licensed psychologist, tells the Daily Dot. “If you think about it, many times, it’s women that are the first ones to comment on the attire and body shape of other women. Knowing they’re under the lens and being evaluated can make women conscious of their body image. I feel like that cattiness is shifting, though. With body acceptance and positivity gaining more media attention, I’ve seen women shifting in their self-perception and judgment of other women.”

I was lucky. For me, being in a loving relationship—that just happened to be a lesbian one—helped me salvage my body image.

At first, I believed that a woman truly finding me attractive was the only thing that helped. That her approval was what made me finally relax.

“Romantic partners play an important role in body image,” Martinez explains. “A partner’s opinion and comments about your body, how it looks, etc., over time can have a huge influence on a woman. It can dramatically shift her perception of her body toward acceptance or negativity about her body shape. These are the messages that she’s receiving every day.”

But my partner’s opinions are only a small part of a larger equation. It wasn’t that she solely shifted my feelings about my body—it was that it took being with a woman to realize I needed to deal with my obsession over what other women thought about my body. Somebody else’s road to confrontation and acceptance will be different. The battles are unique. But for me, a strong, compassionate partner helped lead me there.

Now, two years into a relationship with a loving, patient, and, yes, skinny woman, I have a better relationship with my body than ever. And that’s because I’m in a supportive relationship, not one about tearing each other down or obsessing about our flaws. To say I’d accepted my body would be an overstatement. To say I love it would be a lie. But the compulsion, the obsession, have eased. I fell in love and it was a stronger pull than my insecurities. I had to confront my body issues if I wanted to be in a relationship that was healthy. If I wanted to be in one that worked.