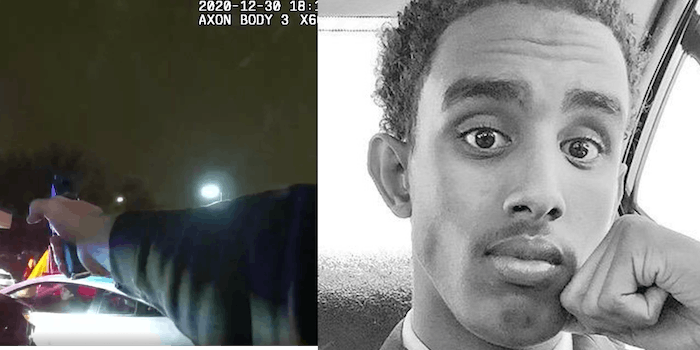 It's the first killing by Minneapolis police since George Floyd's death.

The Minneapolis Police Department released partial body camera footage of the Wednesday evening killing of a Black man, who has been identified as Dolal Idd, during a traffic stop.

Video footage, which is only 27 seconds long, shows officers surrounding a white car at a gas station, screaming, “Hands up!” The officer, whose bodycam footage was released, goes on to fire several shots.

In the video, the officer is at first seen running toward Idd’s car with a gun pointed at him, screaming, “Stop your car!”

The car reverses and turns toward the gas station before being cornered by two other police cars.

“Hands up! Hands up!” the officer screams.

The car stops, and Idd is seen briefly from inside the car pointing something at the officers. A burst of smoke can be seen coming out of the window.

The officers then shoot at the car several times.

Police said Idd was a suspect in a felony case and that he exchanged gunfire with the police, CBS Minnesota reported. MPD Chief Medaria Arradondo also said that witnesses claimed he fired first.

The Daily Dot has reached out to the Minneapolis Police Department.

Idd was identified to the media by his father, Bayle Gelle, who arrived at the scene of the shooting Thursday morning and demanded that the gas station release its surveillance footage to show that his son was innocent, CBS Minnesota reported.

“He was just sitting in the car,” Gelle told reporters, per CBS Minnesota. “And bullets were shot at him, and no reason. Why are we here? Because why were they shooting? Because of color. He is a Black man.”

The 23-year-old man’s death is reportedly the first killing by Minneapolis police since George Floyd’s death in May, according to CBS. The shooting reportedly happened less than a mile from where Floyd was killed.

A fundraiser on GoFundMe has been initiated for Idd’s family, raising $16,000 in under four hours. “He was brutally murdered given no rights that we are often promised we are given in this god forsaken country. He was a family man, loved by his folks and his friends,” Abdirahman Warsame, the creator of the fundraiser, wrote in the description.

The Daily Dot has reached out to Warsame.

People online are now sharing their condolences and their frustration over Idd’s killing.