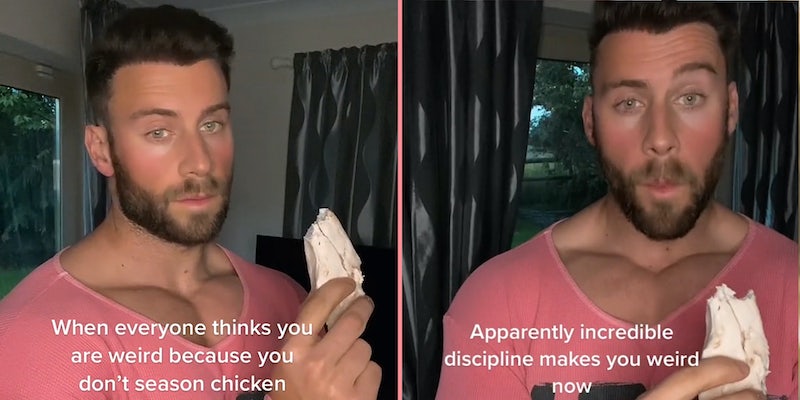 ‘Yeah I was also disciplined when I had an eating disorder’: Bodybuilder’s TikTok about eating unseasoned chicken due to ‘discipline’ sparks debate

'Bro a few grams of spices ain't gonna get you stage 2 diabetes.'

On May 26, Rory Gissing (@rorygissing) posted a video on TikTok with the text overlay: “When everyone thinks you are weird because you don’t season chicken.” The video shows him taking a bite of an unseasoned piece of chicken with his bare hands.

Power of the mind

Several viewers in the comments worried about the extent of Gissing’s discipline, with some arguing that he may have an eating disorder, like Orthorexia.

“Bro a few grams of spices ain’t gonna get you stage 2 diabetes,” one viewer said.

“My brother in Christ seasoning is like 3 calories,” another noted.

“Yeah I was also disciplined when i had an eating disorder…” a third commented.

“The way that diet culture has reframed any form of self-punishment as a noble pursuit, down to the ‘righteousness’ of eating unseasoned feed…,” another viewer argued.

Orthorexia signifies when someone’s healthy or clean eating turns into an obsession that often affects their emotional state and social relationships. As fitness site Breaking Muscle published about the eating disorder, orthorexia “generally has less to do with food quantity and more to do with food quality.”

This, along with other eating disorders, can disproportionately affect bodybuilders, whose bodies are quite literally on display for sport. The pressure of bodybuilding can sometimes push someone’s passion for clean eating out of control.

The Daily Dot reached out to Gissing via TikTok comment.