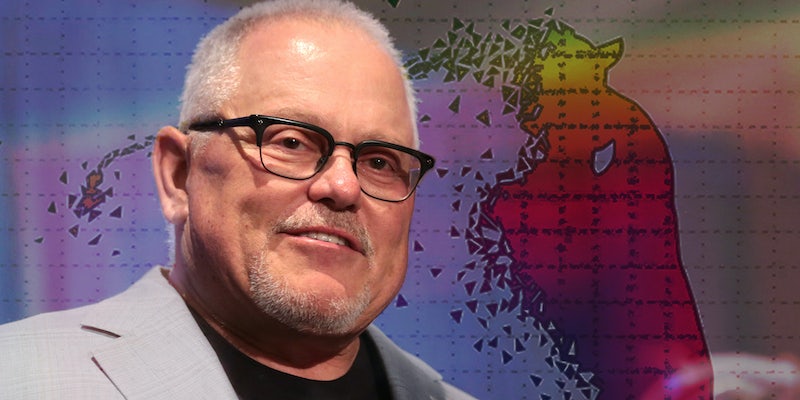 ‘I’m happier now and nowhere near as intense’: GoDaddy.com’s founder pivots to LSD

'There was no clinic or hospital in the U.S. to get this kind of treatment.'

It was a strange series of coincidences that linked Vietnam, Danica Patrick, the game of golf and LSD together, but that unlikely mix is pointing to a new treatment for PTSD.

Increasing amounts of research and effective clinical tests indicate psychedelics offer new therapeutic frontiers for the treatment of Post Traumatic Stress Disorder—especially in combat veterans. Now, a legend of the tech startup era is stepping up to fund that research.

Bob Parsons, founder and former CEO of GoDaddy.com, was wounded while serving with the U.S. Marines in Vietnam. He suffered from PTSD for decades following his service—a condition he acknowledges for costing him multiple friendships and relationships over the years.

“I never really came home,” Parsons says from his Scottsdale National Golf Club in Arizona. “I was suffering from the effects of PTSD up until 2018 when I began reading about the use of psychedelics—the research and legality involved.”

In the decades since returning from Vietnam with a Purple Heart, Parsons’s method for fending off the disruptive emotional and psychedelic effects of his combat trauma was to bury himself in work. He was the driving force behind the success of GoDaddy.com, the domain registration and hosting site that became a driving force in the early public expansion of the world wide web.

After building GoDaddy into a household name and a Super Bowl Sunday fixture with its provocative ads featuring the likes of NASCAR driver Danica Patrick and Playboy model Candice Michelle in branded bikinis, Parsons sold most of his interests in GoDaddy for north of $2 billion. After transitioning his business interests to automotive dealerships, real estate, and the very successful PXG line of golf equipment and apparel, Parsons was one of the country’s most successful self-made entrepreneurs—but still often an unhappy man.

According to Parsons, much of his successful work was a way of coping with the effects of his combat experience. He describes his former self then as angry, short-tempered and close-minded. After his research of four years ago—with the assistance and support of wife Renee—he sought out off-the-radar practitioners of psychedelic therapy.

“These drugs are still classified as Schedule 1 [controlled or illegal] substances,” Parsons says. “There was no clinic or hospital in the U.S. to get this kind of treatment.”

Still, over the course of a few days in an unlisted location with undisclosed therapists, Parsons underwent a week’s worth of supervised psychedelic therapy using multiple substances. He swears he came back from the journey a changed man.

“I’m happier now and nowhere near as intense,” he explains. “I’m still a worker bee and run 14 companies now, but I don’t run them with the intensity I did before.”

Parsons emerged from his psychedelic experiences so inspired by the results that he sought ways to support the scientific and medical research underway to explore, refine, clarify, and legalize the use of LSD, ayahuasca, and other compounds for specific PTSD therapies—not recreational use.

Once Parsons decided he wanted to support such studies financially, a series of phone calls and referrals led him to connect with Rick Doblin, Ph.D., of the Multidisciplinary Association for Psychedelic Studies (MAPS) and Rachel Yehuda, Ph.D., the endowed professor of psychiatry and the neuroscience of trauma at Icahn School of Medicine at Mount Sinai in New York. Both researchers and their institutions receive significant funding from Parson’s philanthropic foundation and continue to lead the way in proving psychedelics’ effectiveness in treating PTSD in carefully controlled clinical conditions.

Doblin explains that the first use of a psychedelic to ease PTSD was by a Dutch psychiatrist applying LSD in the treatment of “Concentration Camp Syndrome” for survivors of the Nazis following World War II. Much of Doblin’s research now involves MDMA (better known in party circles as ecstasy or molly). That drug was legal when originally introduced for clinical use, but became criminalized when it slipped out of the labs and into the social scene.

“All psychedelic drugs are still Schedule 1, even if used in the past for therapeutic purposes,” Doblin says. “We do have legal permission to do research with various psychedelics, but the drugs have not yet received post-research approval for treatment.”

The work of Doblin and other researchers indicates that the main benefit of psychedelics in PTSD and other therapies is the drugs’ abilities to bring painful or subsided issues to the surface.

“Whether it’s emotional material or difficult memories that were repressed, [the drugs] enabled people to break out of the patterns of thought that made those emotions or memories seem overwhelming,” Doblin adds. “In a therapeutic setting, something like MDMA can bring the unconscious to the conscious. It can reduce the fear associated with trauma so people can process and ease that trauma.”

Out in New York, Yehuda insists her early response to reports coming in of the effectiveness of psychedelics in treating psychological issues seemed too good to be true.

“After I kept seeing these positive reports coming in, I became more interested,” Yehuda says. “I attended conferences about the topic and eventually met Dr. Doblin at Burning Man. He invited me to a therapist training where I decided there was really sometime happening here with psychedelics.”

Yehuda describes her work in these Schedule 1 substances as “a new paradigm of care”—offering ways to process traumatic memories, especially for military veterans who struggled to find ways of exploring and expressing their experiences in traditional talk therapy.

“Especially for those who experienced combat, PTSD therapy can be very distressing,” she explains. “As a result many of them drop out of therapy. Most therapists believe giving those clients antidepressants will take the edge off some of that distress, but sometimes that treatment numbs people out too—improving their PTSD symptoms without emotionally engaging with what happened to them. Take the medication away, and the severe symptoms return.”

Yehuda credits MDMA and other psychedelic therapies with putting patients in the correct state to access difficult memories; to increase self-compassion and forgiveness; and to trust both the therapist and the therapeutic process.

“These are all goals we would seek in more traditional psychotherapy,” Yehuda adds. “Still, it’s different because the therapy is done more quickly, in longer individual sessions, under the influence of the psychedelic.”

Both Yehuda and Doblin highlight the importance of “integration” in their therapeutic research. That process begins after the psychedelic session is over and cleared. It involves patients openly discussing what they learned about themselves when they were opened to seeing other dimensions of their identities under the influence of the psychedelic.

“After integration, there’s a measurement we use called the Post Traumatic Growth Inventory,” Doblin says. “It asks, after you survive and process trauma, how do you want to refocus? What do you want to do with your life?”

Yehuda and Doblin report that psychedelic treatment for PTSD is now gaining significant traction in the therapeutic and legal communities—though there remains no official dates or deadlines for the legalization of these therapies.

“People in governmental agencies want new treatments as much as anyone else,” Yehuda says. “While we remain appropriately cautious because these practices aren’t yet legal, I would desrbive us as more cautiously optimistic now.”