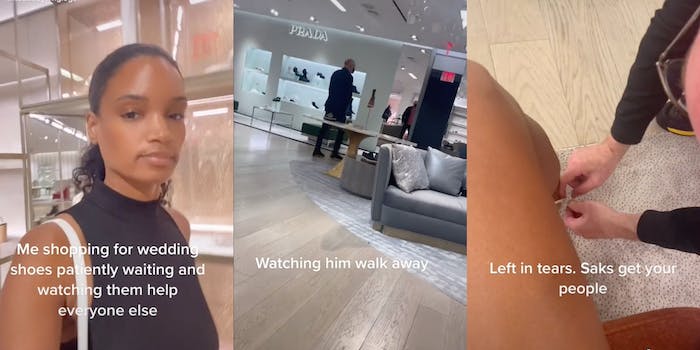 A New York City model shared her experience with racial microaggressions while shopping for wedding shoes at Saks Fifth Avenue.

Erica Wiltz, or @itsdaddylonglegs on TikTok posted a video on the platform detailing the poor customer service—or lack thereof—that she received at the luxury department store. The TikTok has reached over 875,000 views, and those viewers are not happy.

Wiltz said she waited patiently at the store while watching another white patron receive help first.

“Had to demand help but he’s still not getting my sale,” she said whenever she did finally receive service.

After the experience, Wiltz left in tears, captioning the video, “Saks get your people.”

Another person said, “This does not get talked bout enough! They either think we can’t afford it or we got lost and ended up there.”

In a video reply to the comment, Wiltz told the full story for “those who are confused, saying I’m lying or just trying to invalidate my feelings, my experience and make excuses.”

She said she went to Saks for her wedding shoes because she loves the store and has always had good experiences there before—plus she wanted Jimmy Choos for her big day.

She showed up to the store “joyful and enthusiastic” to pick out her shoes. In the shoe section, she watched the salesperson help another customer, who happened to be a white woman. The salesperson attended to the white customer so diligently that Wiltz got more excited for her turn.

Although they took a while, Wiltz said she waited patiently. The whole time, the salesperson apparently never acknowledged her even though it was clear she was waiting for service.

After he was done with the white customer, the salesperson walked away.

“I [was] invisible,” Wiltz said. “And until you experience that, you can’t say shit about that experience because that is the lowest a human possibly feel.”

When the salesperson didn’t come back, Wiltz walked to the back and asked for help. Finally, the salesperson came back to see her, but allegedly brought an attitude, acting dry, bored and rude.

So she didn’t give him a sale.

Wiltz and representatives for Saks did not respond to the Daily Dot’s request for comment.