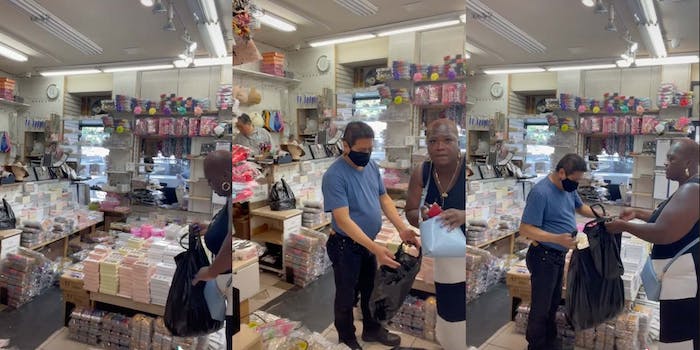 In a viral TikTok video, a Black woman says that the cashier who was ringing up her purchases at Final Touch Jewelry in New York City accused her of stealing.

The TikToker, Veleda Spellman, told the Daily Dot that the cashier said he wanted to “see what was in [her] bag” because he said he saw her stealing. In the video, Spellman is seen emptying her bags and purse to prove that she didn’t steal anything from the store.

“I haven’t taken one thing,” Spellman says in her TikTok. “Every Black person don’t steal.”

Spellman also notes that the clerk threatened to call the police on her.

“Being accused of stealing because you are black is heart Wrenching! #shoppingwhileblack,” she captioned the video, which has been viewed over 260,000 times since being posted on Tuesday.

In her video, Spellman says she is filming to show people “exactly what’s going on.”

Spellman is the CEO and founder of Positive Queens, a women’s network that aims to support, uplift, and empower women globally. Spellman told the Daily Dot that she stopped by Final Touch Jewelry to buy items that she planned to gift to members of Positive Queens.

Final Touch Jewelry told the Daily Dot that there was “no one available” in the store to give a comment on Spellman’s video.

In her video, Spellman says she shops at the store “all the time.” Spellman told the Daily Dot that she will never return to Final Touch Jewelry.

“There were other people of other nationalities in his store,” Spellman said. “I was targeted just about the moment I walked in the door.”

According to a national study on racial bias in retail from Sephora, “Black retail shoppers are 2.5x more likely than white shoppers to receive unfair treatment based on their skin color.”

In the video, Spellman says that she was “publicly embarrassed” in the store. She also says that when she had her back turned to the cashier, he put the items that she was planning to purchase into her bags and told her that she owed him money.

“With what we just went through with COVID, we’ve [got to] be a little bit kinder to one another,” Spellman told the Daily Dot. “But that wasn’t the case for me in the store that day.”