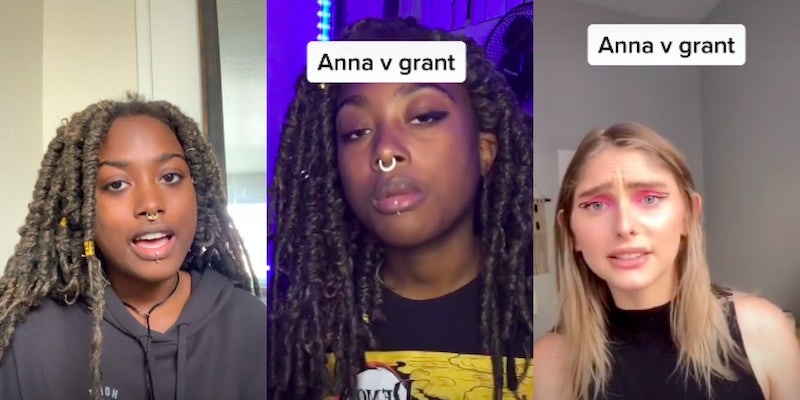 ‘The victim narrative really stresses me out’: Black TikToker says white model told her to ‘lawyer up’ over video pointing out her privilege

'A classic example of a white woman playing victim.'

A model who posted a TikTok denouncing the fashion industry’s body standards in October allegedly threatened to take legal action against a Black TikToker that made videos that pointed out her privilege as a white woman.

The initial video, which has since garnered over 28.7 million views, showed Anna Gantt tearfully talking about a hurtful experience with a casting director and producer. She explained in the TikTok that they told her to lose weight for a shoot in two months. Through tears, she said that she has been modeling since 2014 and used to be a size 0/2. Now, she says she’s a size 4/6 and healthy, after previously suffering from an eating disorder.

Soon after Gantt posted this, TikTok user Sevyn Sativa (@sevynsativa) responded to the video and prefaced their commentary by expressing sympathy for Gantt’s experience. Then, she said, “Women of color, specifically Black women, have been pointing out this problem within this industry for years. Notice how you as a white woman were able to get on this app and tell us your experience, get over 10 million views, 2 million likes, and over 30,000 comments with immediate responses.”

Sativa said that Gantt received a modeling deal “immediately” after the video was uploaded. She pointed out that many models of color do not receive the same positive response when they call out the industry’s unhealthy or unfair standards.

Recently, Gantt made a since-deleted video claiming that two creators called her “fatphobic, a white supremacist, a racist.” Gantt’s deleted TikTok does not address Sevyn directly but appears to references her video discussing privilege. Sevyn denied calling Gantt anything and clarified that her original video was to point out the systematic oppression of marginalized communities in the modeling industry.

Gantt stated in the deleted video that “she’s not taking any legal action.” However, in a statement to the Daily Dot, Sevyn said Gantt left a now-deleted comment on Sevyn’s video saying, “Not surprising you don’t mention the 2 death threats I received directly traces from your previous video. Better lawyer up.” Sevyn also said Gantt blocked her.

Sevyn stated that Gantt has not messaged her privately about any legal action.

“I don’t know whats going on with that but, I do know this whole thing is ridiculous, to say the least,” Sevyn said.

The Daily Dot reached out to Gantt and her modeling agency for comment.