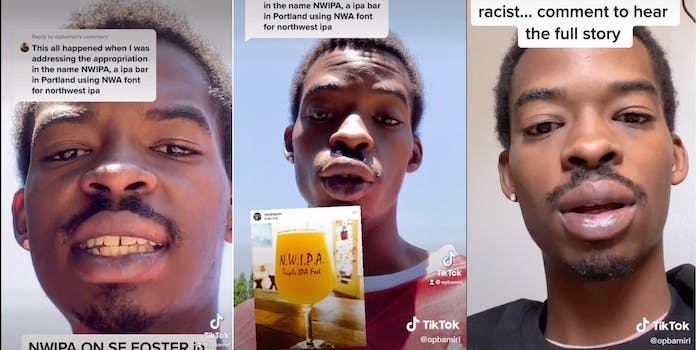 ‘That is the definition of appropriation’: Black TikToker calls out Portland’s white-owned ‘N.W.I.P.A’ bar for name, logo

He says he was laughed at after bringing up his concerns to the bar staff and patrons.

A TikToker is calling out a white-owned Portland, Oregon bar for cultural appropriation because it uses the same font as rap group N.W.A’s logo and treats its Black customers poorly.

In two videos, which now have a combined 70,000 views, @opbamiri describes his experience with a bar in his neighborhood called N.W.I.P.A and how he feels about the name and advertising it uses.

He says the bar uses the same font as N.W.A ([N-word]z Wit Attitudes) and because it is white-owned and caters to mainly white patrons, he argues the use of the name and font is appropriative of Black culture.

According to a review reply from the bar, N.W.I.P.A stands for Northwest India Pale Ale.

The TikToker initially thought the bar was Black-owned, and when he found out it was not, he addressed the staff and patrons about the name and font, asking them if they had any issue with it.

“In a city known worldwide for their George Floyd protests and in the neighborhood known to have Black Lives Matter signs in every single window I was like, this is weird, I’m not going for it,” he says in the TikTok posted on Monday. “So when I go to ask these performative progressive folks if they feel any type of way about the appropriation around the use of the name, I get laughed at and screamed at, and I’m called a racist.”

The TikToker said that he wasn’t trying to be aggressive, rather he was speaking “matter-of-factly.” He alleges several old white men laughed in his face when voicing his concerns and asked him, “Oh, so Black people own fonts now?”

He continues by discussing the importance of N.W.A. as a Black musical group that became famous for speaking out about their struggles and experiences with racism in their West Coast communities. He praises N.W.A for their music and activism against police brutality.

“So when I have a white man say, ‘Hey man, it’s just a joke,’ that’s not funny to me,” he said. “It could only be funny to you with all of your privilege. The likeness of N.W.A was only used because of how much popularity this Black group of people gained. That is the definition of appropriation. That is not appreciation: by stealing something and making money off of it because somebody did it before you and did it through struggle.”

The TikTok was a part two to a video posted on Sunday, in which @opbamiri describes a conversation he had in the bar with a white man who wore dreadlocks.

He continues by debunking the man’s historically inaccurate claims and explains that he only commented on the man’s dreads after the man was being racist.

In the second video, he says the white man told him he had been dealing with racism since before the Black TikToker was born because he had “Black friends.” It is unclear if this man was a patron or an employee of the bar.

“Go write a review on this business,” he concluded in his second video.

At the time of writing, the bar had 320 Google reviews with 3.6 stars and seemingly declining. A majority of the recently posted reviews gave one star and left comments about the bar needing to change its name and font and up its creativity. Older reviews consisted of four- to five-star ratings and commended the service and beer selection. Upon publication, it appears the review number has changed to 307 reviews with a 3.7 rating, suggesting some reviews were taken down.

“Portland is just getting worse & worse. I’m sorry you experienced this,” commented @peachapplepie1 on TikTok.

Others agreed with @opbamiri’s stance that Portland is performative and only pretends to be “woke,” while still shrouded in racist attitudes.

“Oregon has historically been extremely racist. I grew up in Washington and there were states around us that my family wasn’t allowed to drive through,” wrote @mopeymillennial.

Many also questioned the legality of using this specific font.

“Trademark infringement can cost them their business – has anyone sent this to Ice [Cube] or [Dr.] Dre,” asked @subvertnormality.

“N.W.A and the font used is not under copyright, because it lacks “originality” but it is trademarked. I smell a law lawsuit,” commented @lorendaenault.

The trademark for N.W.A. is pending cancellation. However, late N.W.A member Eazy-E’s widow Tomica Woods-Wright, owner of Comptown Records which owns the trademark, previously sued the rapper’s son for trademark infringement in 2017.

The Daily Dot reached out to the TikToker and the bar for comment.