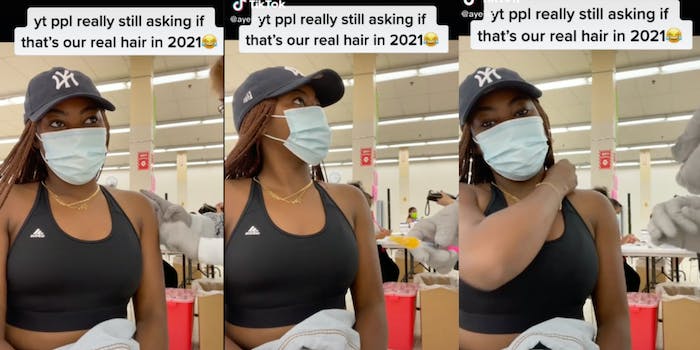 ‘Is that your own hair? It’s beautiful’: Black TikToker’s interaction with white woman sparks debate

'I don't think she meant it out of harm but I see the point.'

A Black TikToker caught the moment a white woman administering her coronavirus vaccine asked her if her waist-length braids are real.

The user, Ejiro, posted the interaction to TikTok, where it has since gone viral, garnering more than 1.1 million views. Text on the video reads: “yt ppl really still asking if that’s our real hair in 2021.”

Black women frequently face microaggressions surrounding their hair, including unsolicited comments, questions and even being touched. Their hair also faces additional discrimination, from being deemed out of dress code to being unprofessional.

The woman administering the vaccine asks Ejiro, “Is that your own hair? It’s beautiful.”

Ejiro decides to have fun with her response by saying she has been growing it out since she was born in 1999 and that her parents never cut it.

Even well-intentioned comments and questions about hair can be emotionally taxing to answer or bring about unwanted attention.

“Was waiting for her to touch it,” one user commented.

When one person in the comments online said Black women were still lying about their hair being real, people replied saying their hair was rightfully theirs.

“If we bought it, it’s ours,” one user commented.

Others chimed in with their own stories of being asked about their hair.

“My teacher asked me and then got confused when I took it out,” one user commented.

Other people, however, commented that the woman was just making small talk and that when they had long hair, they were also asked if it was from extensions.

“She was just giving you a compliment but yeah you should definitely make it a race thing,” one user commented.

But others online argued that even if they seem like harmless compliments, it would be wrong to disregard the daily microaggressions and stereotypes that Black people face from white people surrounding their hair.

“Has anyone ever gone ‘Wow, how do you get your hair like that?? And just reach to touch without asking?” one user said. “Not everyone has the same experience as you.”

In the comments, Ejiro replied with the same humor as in the video. When someone asked if “yt” stood for “YouTube,” she replied, “Yea.” (The term refers to white people.)

Ejiro has a video on her account featuring how she maintains her waist-length braids, which includes applying oil and mousse and wrapping her hair in a scarf and bonnet. She did not immediately respond to the Daily Dot’s request for comment.