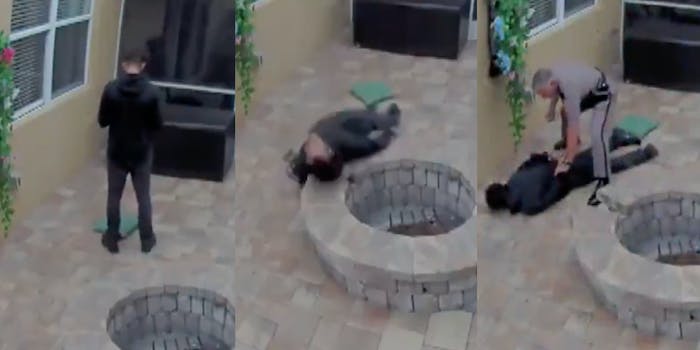 He calls out to his girlfriend, presumably so she can vouch for him.

Video surveillance reportedly shows a Black teenager getting tased while standing on his girlfriend’s back porch in Pasco County, Florida.

Sixteen-year-old Jack Rodeman was waiting near the back door when Highway Patrol Trooper George Smyrnios approached him. A surveillance video captured by the family’s porch camera sees the officer approach with a taser already in hand, pointed at the teen. The officer tells Rodeman to “put your hands behind your back,” to which the teen responds that he “didn’t do nothing.” He attempts to call his girlfriend, presumably so she can vouch for him.

After again demanding that the teen put his hands behind his back, the officer fires his taser. It appears to hit Rodeman in the side, knocking him backward into a stone fire pit set into the back patio. As his back and head connect with the solid stone pit, a piece of it snaps off from the force. The teen screams in pain as Smyrnios approaches him, taser still drawn. He tells the writhing teen he’ll “do it again” if he doesn’t put his hands behind his back. The officer hits him with yet another blast from the taser.

Following a brief cut in the surveillance footage, Smyrnios can be seen detaining Rodeman as his girlfriend exits the home via the back door. The sound cuts out as she approaches; however, she appears to be attempting to vouch for Rodeman.

Rodeman was aware he was being followed by a trooper before he reached his girlfriend’s home, according to text messages shared with Wink News by Rodeman’s mother, Kristina. He texted his girlfriend on the way to her home that “a state trooper just turned around and followed me,” to which she responded that he didn’t need to worry because “you’re not doing anything wrong.”

The teen was ultimately tased twice and arrested on initial charges of resisting arrest, possession of medical marijuana, and a traffic violation. The police department later amended these charges to include “a loitering and prowling charge,” according to Wink News.

Several experts interviewed by Wink News alleged that the arrest appeared to be unjustified, particularly considering that Rodeman had permission to be on the back porch.

“This was more than just a bad arrest, it was a bad arrest with a significant amount of force and injury,” former officer Dave Thomas said. Thomas now trains police officers on proper use of force. “You don’t just take out a Taser and shoot somebody when there’s no active resistance; he’s not in a fighting stance, he’s not being verbally abusive.”

According to a probable cause statement written by Smyrnios and obtained by NBC News, he said that Rodeman’s “behavior, demeanor and body language appeared to be a burglar. It looked to me like he had just committed a crime or was about to commit a crime.”

“My question is what does a burglar look like,” Thomas said. “Unless you catch somebody, like, prowling, there’s something that has to distinguish that. There’s nothing that distinguishes that other than being a Black kid in black clothing, that’s it.”

From Smyrnios’ account, he said he saw Rodeman approaching the Timber Lakes home in dark clothing. When he realized he was being followed by a trooper, Rodeman allegedly darted “behind some bushes,” before approaching the back door of his girlfriend’s home. When confronted by Smyrnios, he allegedly didn’t immediately comply with orders to put his hands behind his back.

Rodeman’s mother noted that, while her son should have followed the officer’s orders, she doesn’t feel Smyrnios’ use of force was justified. She feels his aggression and suspicion were racially motivated.

“My opinion,” she said. “If that would have been a white boy walking down the street, he probably would have been flipped around. I mean my son was just standing there on his phone. He wasn’t reaching in his pockets. The officer? There was no threat to that officer.”

The arrest is reportedly now under investigation. Meanwhile, Rodeman is in custody, where he will remain for 21 days, according to Wink News. The teen has reportedly been experiencing pain from the arrest since it occurred, according to his mother. She intends to sue the Florida Highway Patrol for excessive force.

A clip of the video was also shared to Reddit’s r/PublicFreakout, where it promptly went viral. The footage has earned more than 100,000 upvotes in less than a day, along with dozens of comments from baffled viewers.