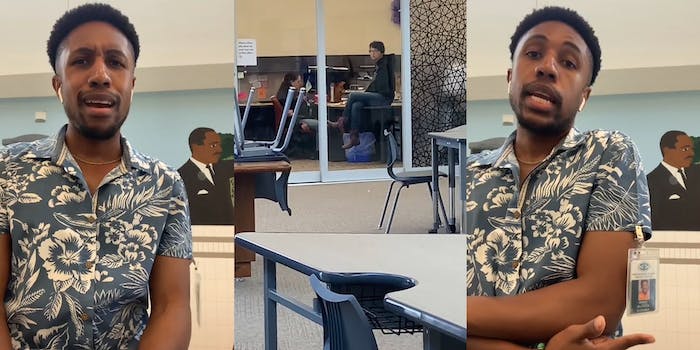 ‘The micro-aggressions!’: Black substitute teacher says teachers at predominantly white school assumed he was not supposed to be there

'You didn't owe them anything.'

A substitute teacher has taken to TikTok to share his experience of being stared at and having his presence at the school he was working at questioned. He says it was most likely based on the color of his skin.

User @tommierusselljr says in his video that while he was assigned as a hall monitor for a day at a predominately white school, he was asked by other educators what he was doing at the school despite wearing an identification badge from the institution.

“I knew today was going to go left because they asked me to be a hall monitor,” he says. “And in most of these schools, these predominately white schools, they question me about who I am, why am I here, although I have a nice little badge right here that says my name, and it says my title. It’s always, ‘who are you?’ Sometimes I wear that on my chest—most times. And they still are like, ‘why are you here?’ So when they asked me to do this I knew it was going to be no different.”

While monitoring the same area for a few hours—where he was assigned—@tommierusselljr said three school staff members stared at him before one of them approached him and asked him to explain what he was doing there.

“Finally, one friend waves me over,” he says. “I come over to her, ‘Yeah, how can I help you?’ [She says] ‘Um, well, can you talk to them because they’re just kinda worried, they don’t know who you are and why you’re here, and they just have some questions.’ Well let’s talk, girl. So I pop into the room, ‘Hi, how can I help you?’ [They say], ‘Nothing.’ She said you needed me, because you were trying to figure out why I was here? Have you talked to an [assistant principal]? Have you called anybody? Have you asked them? I said maybe you should do that.”

At the end of the video, he says he is done substituting.

Some commenters praised his handling of the situation and criticized the other school staff for their behavior.

“I love that you stood up for yourself, cause they were definitely gonna do their own form of bullying,” one commenter wrote.

“Very telling that they ask you why you’re there instead of just assuming they’ve never met you before and introducing themselves like a normal person,” another commenter wrote.

“The way they also tried to wave you down made me mad,” a commenter wrote. “If they care so much, they can get up and come to YOU.”

The Daily Dot has reached out to @tommierusselljr regarding the video via Instagram DM.