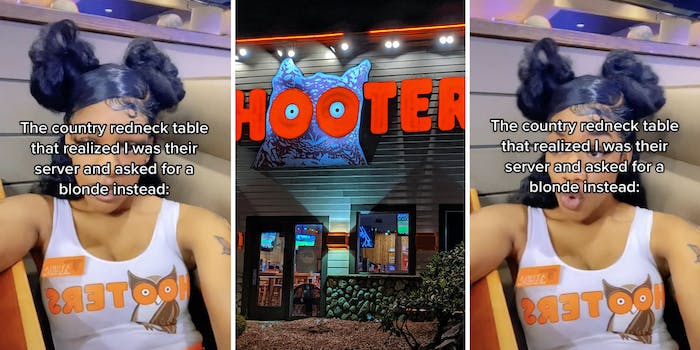 ‘Imagine having a racial preference for who brings you your food’: Black Hooters waitress says one of her tables asked for blonde server instead of her

'The country redneck table that realized I was their server.'

A Hooters server is going viral on TikTok for sharing an encounter with allegedly racist customers at a St. Louis location.

User Ayshia (@a.baebie) is a Black server at the restaurant chain, which is famously known for serving bar food and having an attractive young female staff. On March 24, Ayshia posted a TikTok claiming one of her tables requested a “blonde” server instead of her.

“The country redneck table that realized I was their server and asked for a blonde instead,” she wrote on the overlay text. The video used a sound sampled from the hit movie White Chicks in which Terry Crews’ character says, “Someone get this j*g*boo away from me.”

Ayshia relayed the interaction in one of the comments. “I be like ‘hey Guys I’m Ays-‘ them: “yea no ma’am we want a yt server,” she wrote.

The video has since gained more than 23,000 views and over 100 comments from viewers shocked at the customers’ alleged behavior.

“Imagine having a racial preference for who brings you your food,” a user commented.

“Probably for the best. People like that deserve bad service every single time,” another viewer wrote.

In the video’s pinned comment, a user referenced slavery as a way to poke fun at the situation. “They didn’t have a problem with us serving them before,” they wrote.

“I waited tables for about 3 years and I had black folks tell me they didn’t want a white boy,” a user claiming to be a past server wrote.

“I’ve had an all black table tell the person paying, ‘Don’t tip that white girl, don’t give her none of your money.’ Goes both ways,” another viewer said.

Ayshia once again clarified that she “never said it doesn’t go both ways.”

Some viewers asked the creator if she couldn’t have simply denied them service. The TikToker said she couldn’t, but management could kick people out.

“Management is quick to shut that bs down and get them out,” she commented.

Update 1pm CT, April 12pm: When reached for comment, Ayshia told the Daily Dot that the table in question consisted of four white men. “Once I greeted them they looked at me like I was crazy and told me they didn’t want a … ‘[N-word] server’ and pointing to my friend who’s a blond white girl that they wanted her,” Ayshia said.

Ayshia said she was “shocked” and that a manager eventually kicked them out. She said she “was tryna make a joke out of a disappointing experience” with her video and “never thought it’d blow up.”

The Daily Dot has reached out to Hooters via email.