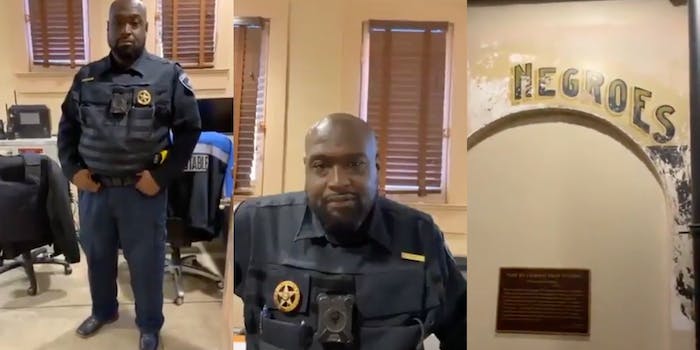 'Every elected official in this county has a private office, except for me now.'

Curtis Polk Jr., an Ellis County constable and the only Black person and Democrat serving in an elected position in the county, was moved following a commissioners’ court vote to make changes at the historic county courthouse to make room for the treasurer’s office.

Following the office adjustments, Polk was provided a small office space with two sheriff’s deputies in the courthouse basement. The move made him the only elected official in the county without a private office. Making matters worse, a segregation-era “Negroes” lettering currently hangs near the office. Polk’s office situation was first brought to light by his friend and fellow Democrat, Jana Lynne Sanchez, who posted the racist sign.

“He’s been far more diplomatic and calm than I would be, but I know he does not feel that he was treated fairly,” Sanchez told the Fort Worth Star-Telegram.

In the video shared to Reddit, Polk says he’s “pretty hurt” by the situation.”I believe there’s other moves that could’ve been made where I could’ve had a private office,” Polk says. “Every elected official in this county has a private office, except for me now.”

He then shows a small open area beneath a stairway where his work belongings have been brought. Finally, the Jim Crow-era “Negroes” sign, which was once above a water fountain, makes an appearance.

According to Star-Telegram, Polk met with County Judge Todd Little to discuss his office situation on Wednesday morning. In a press conference live-streamed to Facebook on Wednesday, they announced the sign would be removed, and Polk would be moved to this office.

The Star-Telegram reported that the water fountain was removed 20 years ago. Little says in a video shared by the publication that officials kept the racist signage as “a symbol, to pierce the hearts and souls of those who yearn for justice and equality for all.”

Little adds, “I would suggest the signage was kept, so the evil of requiring people of another color to drink at an alternate water fountain would never happen again.”