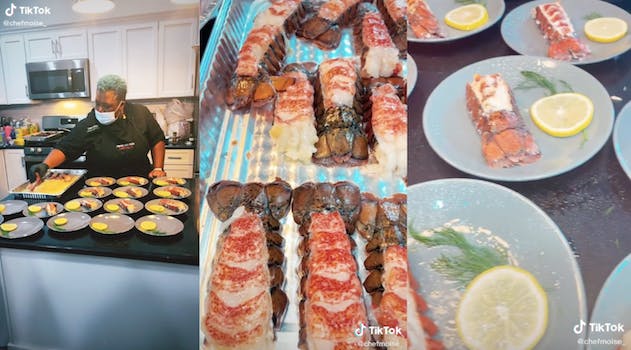 ‘They don’t deserve your amazing food’: Black chef on TikTok claims guests only talked to, made eye contact with her white helper

'I was getting real microaggression vibes from this crowd.'

Thara Moïse, a personal chef who posts about cooking for private parties on TikTok, shared how she was on the receiving end of microaggressions from recent guests.

In the video, which currently has over 1 million views and over 390,000 likes, Moïse says in a voiceover, “Tell me why my guests barely acknowledged me today. Every time I tried to ask them questions or get them ready for their next course or just engage with them, they literally wouldn’t talk to me.”

Moïse explains that she had a helper that day, and the helper “looked a bit different” than Moïse, a Black woman. However, she says the guests had “no problem talking and engaging with” the helper.

“I was getting real microaggression vibes from this crowd,” she says. “Even when my helper would direct them towards me, as the chef, they literally would just ignore me. Like why hire me?”

While she does not specify whether or not her helper was white, the comments section assumed as much.

“Where’s the helper? Was she white? If so, then you already know,” one person commented. Another TikTok user replied to the comment and said, “Did you not watch the whole video??? It’s clear she was white and tried to help the situation.”

Other commenters attempted to uplift Moïse and her cooking. “They don’t deserve your amazing food,” one said. Another wrote, “Just remember she chose/paid for you. She clearly wanted you and your skill.”

The support poured into the comments section, and Moïse acknowledged one comment that applauded her professionalism. She responded, saying, “Well, working with food is calming. And I got paid to show food respect, not them.”

Moïse also acknowledged the comments that argued against her experience and attempted to invalidate her feelings on what she experienced. “I think we should not [be] belittling ‘the help,’ the world runs off the backs of service laborers! I’m happy to be the help that makes six figures.”

The Daily Dot reached out to Moïse for comment but did not immediately hear back.