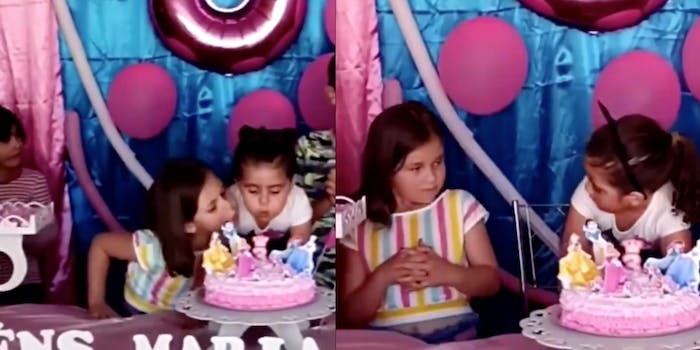 A video of a 3-year-old physically lashing out at another toddler who blew out her birthday candle is going viral, with some people online dubbing the spotlight stealer a “Karen” who’s starting young.

Twitter user @itsTimHell posted a copy of the video on Monday, and it has since been viewed millions of times. In the video, a toddler named Maria gears up to get to the birthday cake portion of her celebration. The decorations show she’s turning 3.

Maria is standing behind her cake, surrounded by her family and friends. As she excitedly prepares to blow out her candle, the toddler next to her is seen sulking (some commenters say she’s Maria’s sibling).

Maria lowers her head to blow out her candle when the other toddler jumps in to blow it out first. The toddler shrugs and smirks, seemingly taunting Maria. Maria grabs the toddler by her hair and yanks her around. Adults rush over to stop the physical altercation.

Many comments on @itsTimHell’s video post condone Maria’s tantrum and even express their wish to harm the other child.

“Man I would have poked her eyes out with the candles,” wrote one user under @itsTimHell’s posting of the video. “Her remorseless ‘What you gonna do about it?’ face, and the adult fixing her hair instead of telling her off? Therapy material right here.”

While expressing how they find Maria relatable, many seemed unaware that they were suggesting physical harm on a young child. “I would’ve let my daughter beat her up,” wrote one user.

“Ok alright I’ll be the adult and say that everyone should keep their hands to themselves BUT that lil’ girl was smiling after ruining the birthday girl’s moment. No ma’am,” author Morgan Jerkins tweeted.

Under other postings of the video, however, some are arguing that both children acted like brats. And others are empathizing with the thunder-stealing toddler, serving a reminder that she’s just a “child being a child.”

“If they’re sisters, this is funny,” wrote another user. “A lot of us were annoying brats, I never did this shit when I was younger, but hopefully she learned that this is wrong.”