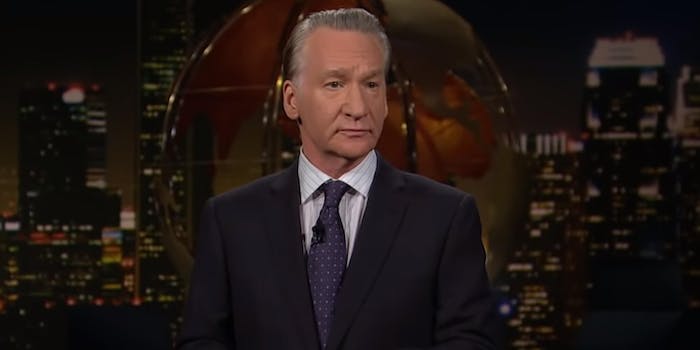 Bill Maher booed on own show over defense of Bloomberg

Maher was defending Bloomberg’s comments on his stop-and-frisk policy.

During his opening monologue, he began his joke by addressing the recent Iowa caucuses and New Hampshire primary results.

“Bernie Sanders won Iowa and New Hampshire. He’s also leading in the national polls, which means we have a new frontrunner … Michael Bloomberg? What the fuck,” Maher said. “Well, Bloomberg must be the frontrunner because liberals are calling him a racist.”

When his audience began booing him, he added, “Keep booing. That’s how you lost the last election. ”

Maher’s joke was referencing a resurfaced 2015 audio clip of Bloomberg admitting to a crowd of mainly rich, white supporters in Aspen that his infamous stop-and-frisk policy, which was ruled unconstitutional in 2013, was purposefully designed to target minorities in New York.

In the tapes, the former Mayor of New York City says, “95% of your murders and murderers and murder victims fit one M.O. You can just take the description and Xerox it and pass it out to all the cops. They are male, minorities, 15 to 25. That’s true in New York, that’s true in virtually every city.”

One user recalled being slammed against a wall as a teenager.

“When I was 16 I was running home after getting off the subway cause I was late for curfew. A group of cops stopped me, threw me against the wall so hard that it bruised my face. Made fun of me for being poor when they saw my shitty wallet. Not first or last time,” they tweeted.

Another Twitter user recalled being falsely arrested for “having a small box cutter on me after work.”

“Due to not being able to see a judge the next day I was sent to Rikers where I saw an old man in his 80’s die from heat exhaustion,” they wrote.

“It was 2002. My dad was stopped & frisked for having a Muslim name,” they wrote. “He was detained w/o a phone call to his family for hours. We couldn’t report him missing. That night I went from hospital to hospital to see if unidentified bodies were admitted. I was 12!”

Jamaal Bowman, a former middle school teacher currently running for Congress, shared his own story of being pulled over after work.

“One day driving home from school, I was pulled over by the cops. Taken out of my car. Handcuffed. Placed in the back of a police car. Then released without explanation,” Bowman said. “Bloomberg has not shown he understands the pain he caused in our community — at all.”

During a panel on his show, he addressed the trending hashtags by reiterating that movements like that are why Democrats will lose to Trump in the 2020 presidential election.

Maher also repeated his defense of Bloomberg, rereading his comments and then implying their validity by asking, “Is that true? I’m just asking if that is true.”

Maher conceded to push back from panelists by saying that Bloomberg has “real blind spots” but continued his defense of the former mayor’s policy by adding, “I think he thought he was helping, and I think he pictured—he’s a business guy, and part of this is because the police can’t be trusted with this policy, because they do throw people against the wall instead of doing it the way they should sometimes, not all—OK, but he’s picturing not that person, he’s picturing the store owner who’s saying, ‘My neighborhood’s a tough neighborhood—can you help me?'”