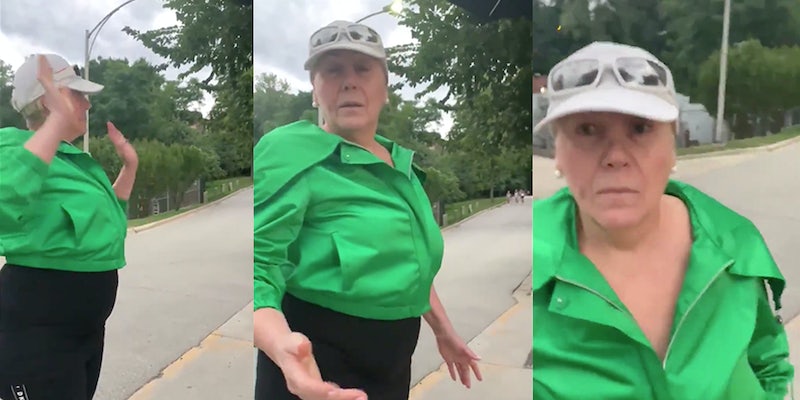 In the video, she accused the cyclist of 'wanting to kill her.'

A woman who was recorded confronting a group of Black cyclists about whether they were “allowed” on a public pier in August has been charged with a hate crime.

The video, which was recorded about 20 miles north of downtown Chicago in Northfield, shows the woman accusing a Black biker of “wanting to kill her,” moments before swinging at him. The woman, since identified as 65-year-old Irene Donoshaytis, turned herself into Winnetka police on Wednesday, BET reports.

According to BET, Black Skokie resident Otis Campbell just finished a 15-mile cycle ride with his cousin and friend, both of whom are also Black, when Donoshaytis approached the trio, allegedly saying, “This is America. This is America, you can’t do this. I’m from Winnetka. You need to go back where you’re from.”

In the immediate aftermath, which Campbell recorded, Donashaytis approaches a park employee, who explains to her that in order to walk along the public pier, no passes are needed.

She also continues to berate Campbell.

“Are you crazy? Do you want to kill me,” she continues. “It feels like it,” she says as Campbell replies: “No, why would I want to kill you? Is it because I’m Black?”

“Yes,” Donashaytis says, calling Campbell “stupid” and an “idiot,” just before she lunges at him twice and seemingly hits him. The video abruptly ends.

Campbell reportedly claims she left a bruise on his arm after hitting him.

In a later clip tweeted by Campbell, he provided some context around the backstory of the video, writing, “me and two others bikers to the bottom of the pier after a long bike ride from Skokie. After about two minutes Karen decides to come over to us and go into detail about how we needed passes to be here and we needed to leave immediately or she’s calling the cops.”

Text across the video reads: “Her tellin’ us ‘we live in America,'” and “I’m like, ‘are you really a minority trying to tell me this is America?'”

Following the incident, Donoshaytis was reportedly taken into custody and transported to Skokie courthouse for a bond hearing that afternoon. In addition to having her passport confiscated and being ordered to avoid contact with the victim and witnesses, her bond was set at $10,000.

According to the Chicago Tribune, Donashaytis was charged with a Class 4 felony hate crime filed to the Cook County State’s Attorney Office.