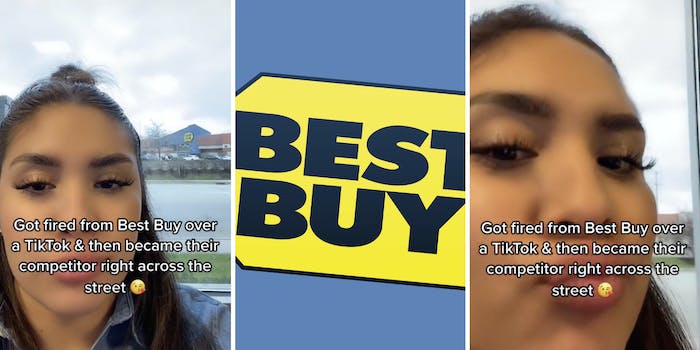 ‘BEST BUY SOO PETTY’: Woman says she was fired from Best Buy—now works across the street as a competitor

'If it ain’t the results of your own cause and effect.'

A woman says she was fired from Best Buy after posting a TikTok about wanting to quit, and now she’s working across the street at a competing company.

On Friday, Itzel (@_itzelsalazar_) posted a TikTok that shows her across the street from the Best Buy she says she used to work at. “Got fired from Best Buy over a TikTok & then became their competitor right across the street,” reads the text overlay.

Itzel did not specify what store she now works at, just that they sold electronics as well.

By Monday, the TikTok had over 1.4 million views. According to Itzel, the post that got her fired shows her and a Best Buy co-worker lip-syncing to audio by comedian Jeff Wrights pretending to be two people wanting to quit their job.

“I hate this job for real,” Wright says. “When you gonna quit? I’m gonna quit the same day you quit. Matter of fact when you put your two weeks in, lemme see the papers so I can write on the back, ‘me too.’

In TikToks posted in February, Itzel says she was “fired without a warning” from Best Buy. She says her co-worker who was in the TikTok was fired, as well.

“OK it was unnecessary to make the video, but it was just for fun,” she says in one video. “I was just having fun, like that’s it.”

TikTokers asked how Best Buy found out about her TikTok, which she addressed on Sunday in a post. “That’s how I got fired hella people tagged Best Buy in that video & it got to corporate lol I’m not mad y’all I’m making more than twice as much now,” her caption reads.

“BEST BUY SOO PETTY,” one TikToker commented in response to Itzel and her co-worker being fired.

“I mean, you said you quit, idk what you want,” another TikToker wrote.

“If it ain’t the results of your own cause and effect,” commented another.

The Daily Dot reached out to Itzel via TikTok comment and to Best Buy via email.