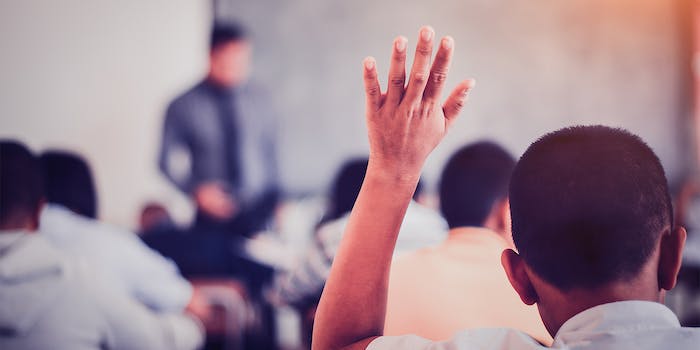 'Full of himself and misogynistic. A very unpleasant person overall.'

A Massachusetts elementary school teacher has been fired after HuffPost exposed him as a white supremacist author who regularly under various pseudonyms including “Sinclair Jenkins.”

Benjamin Welton, 33, a Boston University Ph.D. candidate who calls himself a “race-realist,” was terminated from Star Academy in Watertown, Massachusetts, where he was an English, social studies, and computer science teacher.

His writings under his alias were examined by an anti-fascist group called the Anonymous Comrades Collective and subsequently exposed to his employer through HuffPost.

HuffPost reports, “[Welton as Sinclair Jenkins] wrote that his radicalization began in the Navy, where it angered him to see ‘blacks’ be mean to his fellow white sailors. Later, in graduate school, he grew disgusted over the ‘ingrained culture of anti-white hatred’ in academia.”

“I now try to inject race realism into my working life,” Welton wrote as Jenkins in a 2017 article for American Renaissance, per HuffPost. “When I teach my students or write papers, I refuse to engage in cultural Marxism or in anti-white rhetoric.”

The report says white supremacists websites like American Renaissance and VDare, helped reaffirm his view of the “biological foundations to race.”

Welton wrote an essay titled “From Wide-Eyed Liberal to Race Realist” for American Renaissance under the Jenkins alias; he also wrote under “Jake Bowyer” and “Elias Kingston.”

Welton also freelanced for major media outlets, including the Atlantic and Vice, and far-right websites Daily Caller and the Weekly Standard. He also wrote a book released by Antelope Hill Publishing, which has published books by Nazi sympathizers and other far-right extremists.

Welton was eventually exposed through one of his aliases on Poa.st, which HuffPost describes as “a Twitter knockoff crawling with racists and extremists.” HuffPost captured the post.

Welton wrote, “To show my hand: I am the Spooky Nationalist’s Confederate in bayou and hellbilly retard with too education. I write as Elias Kingston (see:Ending Bigly). I write as Sinclair Jenkins (AmRen/book out soon from Antelope Hill). I write as Jake Bowyer (VDare).”

Welton had made a profile with third-party avatar site Gravatar, and the name “Jake Bowyer” was linked to a “Ben Welton.”

Huffington Post also notes a “scathing” review as a teacher at the University of Vermont.

“A teacher with too many personal opinions and present them as facts,” it starts. “Full of himself and misogynistic. A very unpleasant person overall. He can’t help himself from spewing his: Proto-Fascist, Libertarian, Anti-Feminist and Neo-Conservative propaganda in front of the class.”