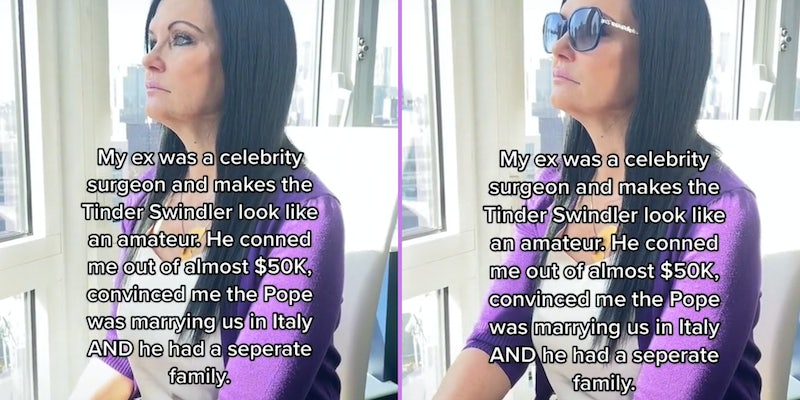 ‘Makes the Tinder Swindler look like an amateur’: TikToker says she was scammed by her celebrity surgeon ex-partner

'If we can speak up, it’s very important to do so.'

Until 2016, one could only find good things in the press about Dr. Paolo Macchiarini. According to one report, Macchiarini was a pioneer in the medical field who created plastic airway replacements, a groundbreaking invention in regenerative medicine. He worked for universities like Sweden’s Karolinska Institute and was featured in magazines and documentaries for his work. But in 2016, as he remained in the spotlight, he was outed as an alleged con man by his then-fiancée, Benita Alexander. She is now sharing her story on TikTok.

Alexander was one of the people allegedly defrauded by Macchiarini. She wasn’t his patient but rather his partner. She told the Daily Dot that in 2013, she was a producer working on a documentary about Macchiarini when they met.

She said he made promises of a wedding with an amazing venue, attended by his famous friends, and officiated by the pope. She alleged that not only did he fail to fulfill those promises but that he reportedly conned her out of nearly $50,000.

In a 16-part video series on TikTok that started in February, Alexander details what she calls “the real full story on Dr. Paolo Macchiarini.” She says she started working at NBC and was eventually introduced to Macchiarini after she was assigned to a story about regenerative medicine, a field that Macchiarini was considered a leading expert in.

Alexander says in one TikTok that she first met him around the time he was doing surgery on a young Korean girl, Hannah, who “never left the hospital” as she was born without a windpipe. Alexander says at the same time, her ex-husband was dying of brain cancer. She says Macchiarini comforted and advised Alexander on how to cope, and a friendship developed. As their relationship grew, Alexander says she felt they “fell in love” in a way that “felt like a fairy tale” over two years.

Alexander told the Daily Dot that in retrospect, there weren’t many red flags and that Macchiarini was a master manipulator. “I think he was an extremely adept manipulator. There was a lot of gaslighting, brainwashing, the typical things that happen with these types of con men,” she said.

“The only thing, and it was something that we argued about a lot toward the end of our relationship, was that he had never taken me and my daughter to his house in Barcelona,” she continued. “That’s one of the tips I always give women now: When you’re dating someone, you have to see where the person lives. If they will not let you see where they live, typically, something’s wrong.”

Alexander said that Macchiarini told her he was still married to his wife because they were Catholic but were separated. He reportedly assured her he’d be divorced prior to the wedding, and she was was under the impression the divorce was final when they started planning the wedding. She said he also claimed they were going to be married by the pope because he had contacts at the Vatican. She said he claimed dignitaries and celebrities would be attending their wedding.

Alexander said she did her research and found that, at the time, the pope was marrying couples who “lived in sin,” such as divorcées, at the Vatican and that Macchiarini seemed to have the friends he claimed to. She said she bought five dresses for wedding events, and he told her he’d pay her back. She said he never paid her back the $50,000 she spent on the dresses.

Alexander said she faced and continues to face victim-blaming.

“One of the reasons I am so adamant about continuing to talk about this is because I think victim-shaming is terrible. It’s so damaging. It defeats the point,” she said. “We have somebody who has been brave enough to share something that’s already humiliating and devastating. If your response is to point a finger at a victim, that’s really sad. It does so much unnecessary damage. We need to be pointing the finger at the con man.”

Alexander said that, at the time, she quit her job and prepared to move to Barcelona with her daughter so that she could be with Macchiarini.

What tipped off Alexander, she said, is the news that the pope wasn’t going to be in Italy the day of her wedding. She says in a TikTok she woke up out of her “love haze” and hired two private investigators, who allegedly found out that the whole wedding was a lie. No venues, caterers, or photographers were booked, and Macchiarini never pursued a legal divorce. The address he gave her to give to guests was also allegedly fake. She refers to the revelations as “just the tip of the iceberg.” Alexander says at the same time, Macchiarini was being investigated by Karolinska Institute, a medical university in Sweden, for acts of scientific misconduct. This, Alexander says, provided a reason for her to cancel the wedding.

She said on the day they were supposed to get married, Macchiarini told her he was in Russia. Alexander said she knew he wasn’t in Russia and decided to fly to Barcelona herself to “surprise” Macchiarini in a quest for answers in July 2015. She said she was headed to the address he had previously given her for a home in Barcelona. But upon searching, Alexander said she came to the conclusion that the address he had given her was a fake and found the real home. She said she donned a disguise, rallied her friends, and hid in the car as they knocked on the door.

She said she discovered Macchiarini at the home with a young, blonde woman who wasn’t his Italian wife and two young children calling him “Dad.” She said that not only was he married to another woman and engaged to Alexander, he had another hidden family.

While Alexander said she wanted to confront him, she elected not to for the sake of the children. She said she instead told him she knew everything in a lengthy text, to which he replied: “wow.” In concern for the safety and wellbeing of his patients, Alexander said she went public with her information on Macchiarini in 2016.

Soon after, a Swedish documentary that Alexander describes as “scathing,” covered all of Macchiarini’s alleged medical misconduct. According to Agence France-Presse, seven of the eight patients he reportedly did a “groundbreaking” surgery on ended up dead. The sole survivor reportedly had the procedure reversed.

Alexander now spends her time ensuring other women don’t go through what she did via her podcast and TikTok account @loveconned.

Macchiarini was sentenced to prison in Italy “for forging documents and abuse of office,” according to BMJ.

This story has been corrected to reflect that Macchiarini was sentenced to prison but is not yet imprisoned; Alexander bought five dresses, not one for $50,000; and the alleged fake address was not printed on their wedding invitations but given to guests who asked for it. This story has also been updated to clarify that Alexander was under the impression Macchiarini’s divorce was final when they started planning their wedding.