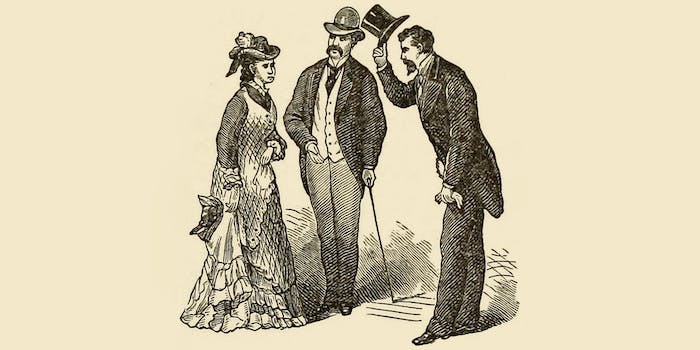 Why back-handed benevolence is the most dangerous brand of sexism

Not all sexism is hostile.

No matter how hard people push for gender equality, women are still paid 80 cents for every dollar earned by a man, less likely to move up in the workplace, and picked apart by their appearance to fit impossible beauty standards. This was proven time and again in 2016, with the president-elect blaming a woman’s professional stature on PMS, Hillary Clinton scrutinized for her makeup-free face and her husband’s indiscretions, and female athletes’ Olympic success overshadowed by talk of their husbands’ careers and “comebacks” after motherhood.  Sexism remains alive and well.

Though the impacts of sexism have been felt since the dawn of Western civilization, the idea of ambivalent sexism, or bias toward women, was first popularized by social psychologists Peter Glick and Susan Fiske in 1996. In their research, the term was broken down into two subcategories that are often thrown around today when describing how men demean women: hostile sexism and benevolent sexism.

“In nearly all cultures and time periods for which information is available, women have been restricted to social roles with less status than those of men,” write Glick and Fiske. But whereas hostile sexism is overt (“All women are inferior”), benevolent sexism is more covert and often framed as a positive (“Women make great secretaries!”).

Because of its seemingly harmless name, it’s important to figure out how benevolent sexism intertwines with hostile sexism. One isn’t necessarily any less damaging than the other.

What is hostile sexism?

Hostile sexism is the most commonly identified form of sexism, in which women are objectified or degraded, like saying cleaning is a “woman’s job” or feeling like you’re entitled to grab a woman “by the pussy.” Or, when asked whether women deserve to make the same amount of money as men, you answer, as a presidential candidate, “You’re gonna make the same if you do as good a job.” In other words, hostile sexism is often presented in anger, resentment, or fear because a man’s ego is being challenged.

Men who decry sexism often see it as feminist nonsense or an unnecessary power struggle since women shouldn’t be more successful than their husbands in the first place. These are the men who are also, ironically, quick to call women “sluts” or “whores” for not putting out. The old sayings of women feeling like they’ve “hit the glass ceiling” or have been “put in a box” perfectly describe what men are trying to do when they act with hostile sexism.

What is benevolent sexism?

Benevolent sexism is delivered in a positive disguise but still ends up being just as harmful to women. It might even be worse because it presented in a casual, nonchalant manner, encouraging both men and women to poke fun at each other. For example, when a guy asks his girlfriend if she can fold his clothes because she’s “better at chores than he is.”

A frequent example of benevolent sexism from the 2016 election was the use of “mothers and daughters” by men trying to convey why other men shouldn’t be sexist.

Every wife, mother, daughter — every person — deserves to be treated with dignity and respect. https://t.co/AVSEBastVc

Hitting on married women? Condoning assault? Such vile degradations demean our wives and daughters and corrupt America's face to the world.

Instead of simply standing up for women because they deserve to be treated equally, men who evoke “mothers and daughters” are positioning women to only matter in relation to them (a.k.a. men), casting them as fragile beings needing protection against “vile degradations.”

It is these stereotypes—homely mother, chaste daughter—that are the basis of benevolent sexism. Other examples include women being more beautiful than men, and therefore making it cool to objectify them, catcall them, and eroticize them, especially if they fit within the cis white standards of beauty. Benevolent sexism also appears in the workplace with the assumption that women are naturally more talented at administrative jobs like being a secretary or personal assistant. Women are seen as more capable of arranging meetings, events, and children’s schedules because they are organized and just “better” at it.

Because these ideas have long been internalized by women, benevolent sexism can also normalize gender inequality. And it’s not like men aren’t affected by benevolent sexism, too. When someone says that women are more compassionate, the assumption is that men do not have that same capability. Men are distanced from their right to be emotional or paternal. We are giving them the excuse not to be empathetic and ultimately excusing their prejudice.

“Sexism is indeed a prejudice… and probably always has been, a special case of prejudice marked by a deep ambivalence, rather than a uniform antipathy toward women,” said Glick and Fiske in their study.

In other words, sexist men aren’t sociopaths; they just feel a giant shruggie toward women and their concerns. If only women had the privilege of basking in their 20-percent-bigger salaries and shrugging back.