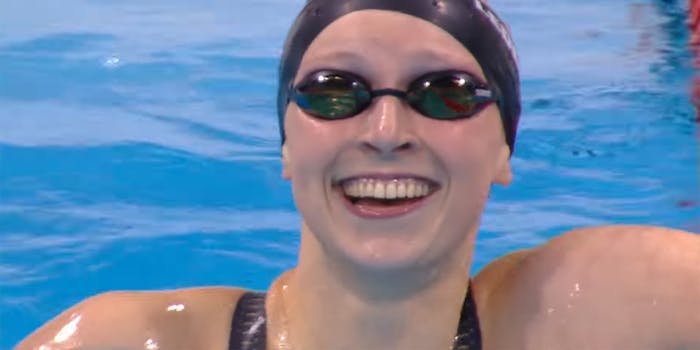 One athlete was referred to as the 'wife of a Chicago Bears lineman.'

Coverage for the 2016 Olympics in Rio de Janeiro got off to a rough start this weekend. Viewers criticized NBC’s decision to delay and edit the broadcast of the opening ceremony Friday night because women are “less interested in the result and more interested in the journey” and an NBC commentator credited Hungarian swimmer Katinka Hosszu’s husband and coach for her world record gold medal.

But as viewers attentively watched the Olympics Sunday, that was only the beginning.

The Chicago Tribune is receiving plenty of flack for a tweet it posted about Corey Cogdell, a trapshooter who won her second bronze medal in women’s trap on Sunday. The article itself now leads with Cogdell’s name, but on Twitter it led with her husband, Chicago Bears lineman Mitch Unrein, while Cogdell was only referred to as “wife of a Bears lineman.”

Some argued that the tweet contextualized Cogdell for the Tribune’s audience, but the tweet appeared online mere hours after Hosszu’s husband was applauded for her accomplishments, and it hit a particularly hard nerve with fans keeping up with coverage over the weekend.

15. You would never identify Mitch Unrein as the husband of a two-time Olympic medalist in the headline of a story about him.

During NBC’s broadcast, Bob Costas previewed Dana Vollmer, the 2012 gold medal winner for the 100-meter butterfly, in a package before she was set to defend her medal. NBC, along with the New York Times focused on Vollmer’s comeback after becoming a mother. And while Vollmer won the bronze after Sweden’s Sarah Sjöström won gold with a world record swim, her interviews have mostly been about motherhood. (Michael Phelps, a first-time dad ahead of Rio, has been asked about fatherhood far less often.)

Because being a mother and being a gold medalist IS IMPOSSIBLE OH GOD GIRL BODIES ARE ONLY MEANT TO DO ONE OF THOSE https://t.co/OzCbKOotEa

He asks two men (not Phelps) about racing, Dana Vollmer about being a mom. (I think Jenna Bush also asked about the baby.) C'mon folks.

Women’s gymnastics has long been an event with “gendered expectations” and commentary that focuses significantly on the athletes’ bodies (when some of the competitors are minors), and commentary that compared the U.S. team’s stance after competing to “standing in the middle of a mall.”

Toward the end of the night, people began commenting on just how much sexism had appeared in the Olympics to date, and the Guardian’s Julia Carrie Wong sarcastically wondered how a man hadn’t been given credit for Simone Biles’s dominating performance.

But at least in one instance Sunday night NBC pushed back on the emerging narrative of controversial coverage. In addressing U.S. swimmer Katie Ledecky, who beat her own world record to win the 400-meter freestyle, one commentator shot down the criticism that Ledecky “swims like a man.”

The Olympics are on for two more weeks.