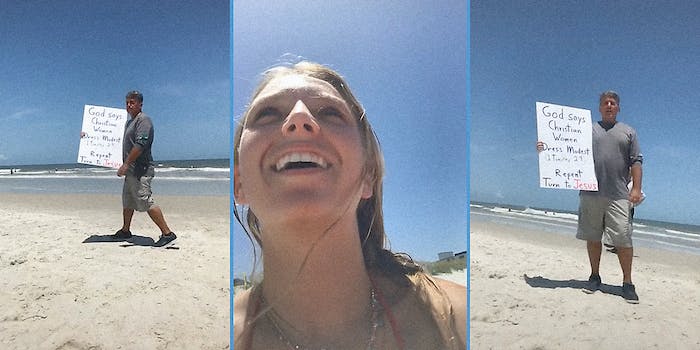 'He’s just out there as an excuse to stare at women.'

A video shows a man walking down Jacksonville Beach, Florida, and holding a sign that reads “God says Christian women dress modest.” A woman he was apparently harassing shuts him down in the viral TikTok.

His sign refers to the Bible passage 1 Timothy 2:9. In the video, he stands in front of TikTok user @.katie.simmons as she questions him.

“Sir, it’s a beach. Are we supposed to dress modest at a beach?” she says.

“God doesn’t want women—” the man begins, but the woman cuts him off before he can finish his sentence.

She shoots back with a response to unwarranted preaching: “What if God’s fake?”

“Well his ankles are showing lmao,” reasoned one user.

Other users noted additional Biblical sins that no longer apply or have been misinterpreted in modern society.

“Ask him if he’s wearing two different types of fabric (also a sin),” one user said.

“God says Christian Men Don’t Look at Women Lustfully (Matthew 18:9 And if your eye causes you to sin, gouge it out and throw it away.),” another said.

A few users suggested the man was preaching around the beach as an excuse to leer at women.

“He’s just out there as an excuse,” one user said, “to stare at women without them feeling uncomfy.”

The Daily Dot reached out to user @.katie.simmons for comment.